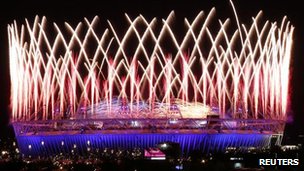 The Olympics, Paralympics and Diamond Jubilee have improved how the UK is viewed by other countries, a survey for the British Council has found.

About two-thirds of 9,000 adults polled in 11 countries said Britain had done a good job of running the Games, and 44% said it had a greater world influence.

A third of people said the Games had made them more likely to visit the UK.

But business groups said more needed to be done to ensure Britain's popularity continued in the long term.

The British Chambers of Commerce (BCC) called on the government to do more to boost British exports, while the British Retail Consortium said the Games had done little to boost retail sales.

The Council commissioned researchers at Ipsos Mori to ask thousands of adults in 11 key overseas economies including the USA, Brazil, China and India for their view of Britain following the major national and international events of 2012.

John Worne, director of strategy at the Council - which aims to build relationships for the UK around the world - said the results were testament to what "Team GB" could do when it "pulls together".

"Without a huge global event like the Olympics next year, we need to keep on finding smart new ways to share our soft power assets: English, our education system, our vibrant arts scene and our entrepreneurial spirit," he said.

Suren Thiru, UK economics director at the BCC, said the challenge facing the UK was to develop a "long term economic legacy" post-2012.

"One of the lessons from the Games was that perception is important. We need to build a positive perception of the UK, and more must be done by the government to promote trade and investment." 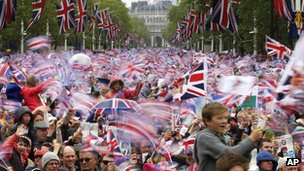 The Diamond Jubilee celebrations created a boost in retail sales

While London 2012 did little to boost trade in the retail sector, the BRC said the Queen's Diamond Jubilee celebrations had created a "bunting boost" to sales in June.

BRC spokeswoman Mandy Murphy said: "The Games may not have translated into extra sales, but they did give a welcome boost to consumer confidence and showcase London and other Olympic locations."

Meanwhile, tourism agency Visit Britain said a strategy was under development which aimed to drive visitors toward the UK as a holiday destination.

It has predicted that the UK will attract about one million extra overseas visitors in 2013, an increase of 3%, who will contribute around £19bn to the British economy.

Spokesman Mark Di-Toro said: "These spectacular events created a once-in-a-lifetime year for the British and a year in which our country has never looked so good to viewers around the world.

"That publicity will be harnessed by Visit Britain to drive visitors here in the years to come."