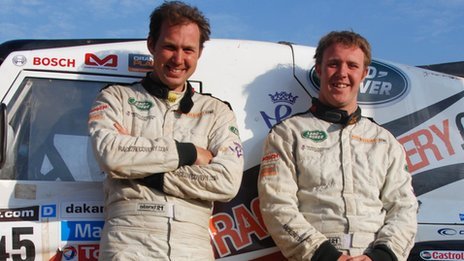 "Never forget that your life is always in front of you, that it's fun and that it's wonderful."

A single sentence that sums up everything the race2recovery team of injured soldiers set out to prove; everything that, in fact, they did prove - in sensational style.

On Saturday evening, amid ecstatic scenes in the Chilean capital of Santiago, two members of the 28-strong team nursed their 4X4 vehicle - which they nicknamed Joy - across the hot, dusty finishing line to complete arguably the toughest race in the world - the Dakar.

As they did so, Ballymena-born soldier Corporal Philip 'Barney' Gillespie (the co-driver) and his driver, Major Matt O'Hare, made history; they became the first ever disability team to finish the legendary event.

"Our team motto is 'beyond injury - achieving the extraordinary' and we've done just that. ”

Twenty-four-year old Barney lost a leg when he stood on an improvised explosive device (IED) in Afghanistan's Helmand Province two years ago.

Describing the 15-day rally, which covered nearly 9,000km of incredibly hostile terrain through the wilds of South America, as the toughest thing he had ever done, he said: "It has pushed every single one of us to our limits and beyond."

I first met Barney back in December and he told me how the team's aim was to challenge and change people's perceptions of disability. Well, they've certainly done that. 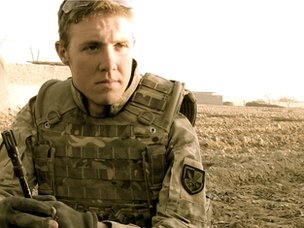 On Sunday afternoon, I rang his hotel room only to be told I'd just missed him. He was on his way to the post-race parade. "He's in big demand now that he's one of the stars of the show," explained one of his colleagues.

As for Barney himself, well there's no chance of the adulation going to his head. His focus remains firmly on the team's mission.

"To be able to stand here at the finish line and say we achieved what we set out to achieve, to become the first ever disability team to complete the Dakar Rally, feels magical," he said.

"Our team motto is 'beyond injury - achieving the extraordinary' and we've done just that.

"I hope that we've been able to inspire people who may be facing difficulties through injury or illness. The support we've received from everyone - our sponsors, supporters, families, friends, the military and complete strangers - has been amazing and is testament to the ability and dedication of this team."

The race2recovery team started out with four vehicles. By the sixth stage, Barney's was the only one still going; two mechanical failures and a crash having accounted for the other three. 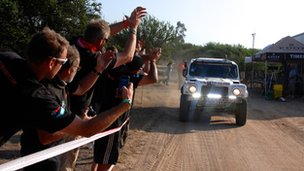 Barney said the crossing the finish line was a "magical" achievement

With the dream hanging in the balance, the pressure was on; and it was only to get worse.

'Joy' was overheating and Barney and Matt were forced to do much of their driving at night. But they made it to the rest day when the mechanics were able to fix the problem. After that, they never looked back.

Yesterday, the Duke and Duchess of Cambridge sent a personal message of congratulations.

Prince William told the pair what they had achieved was "a triumph of perseverance and teamwork". He added: "You have shown the world what true valour looks like".

The team is due to arrive back in the UK later this week and a book about their adventure is due to be published in March, with part of the proceeds going to 'Help For Heroes'