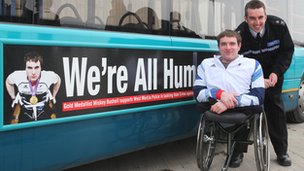 A poster campaign to raise awareness of disability hate crime has been launched by police in Shropshire.

It is being supported by Paralympic gold medallist Mickey Bushell MBE, who was born in Telford.

West Mercia Police said there were 53 offences and 21 incidents of disability hate crime reported to the force between April 2012 and January 2013.

The posters with the slogan "We're All Human" will be displayed on buses in the county.

Mickey Bushell, who won gold in the 100-metre wheelchair sprint at the 2012 Paralympic Games in London, said the campaign would let those affected "realise they're not alone".

Sue Wood, a wheelchair user from Shrewsbury, said she was once told by two other customers in a shop that people like her "shouldn't be allowed to live".

She said victims of disability hate crime often felt the police had more important issues to deal with and she hoped the poster campaign would help change this attitude.