HomeNewsDisability benefits: Ministers revise assessment regulations All DLA claimants are to be reassessed for he replacement PiP benefit 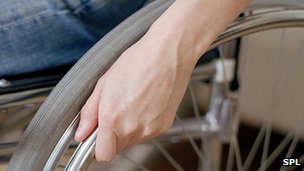 Regulations governing eligibility for benefits for disabled people will be changed after criticism of their likely impact, the government has announced.

As a result, how - and not just whether - a claimant is able to accomplish tasks like walking and planning journeys will help determine the amount they are entitled to in benefits.

Claimants who manage the tasks, but not "reliably", will get higher payments.

Ministers admitted there were concerns that the proposals were "unclear".

The Personal Independence Payment (PIP) will replace the existing Disability Living Allowance (DLA) in April. People who are less mobile will be entitled to higher payments.

Campaigners had warned that people deemed capable of walking more than 20 metres could receive lower payments - even if they were unable to do so "safely, reliably, repeatedly and in a reasonable time period".

Ministers had previously denied the claim and argued that these words did not need to be written into legally binding regulations.

But minister for disabled Esther McVey said on Thursday: "I know that disabled people and their representatives feel strongly that this important concept is set out in law and I am happy to do this."

She added: "Our intention has always been the same - we want to target support at those who need it most.

"We have always said that we will not just look at whether individuals can carry out activities but also the manner in which they do so."

Critics of the government's changes say one third of disabled people live in poverty and an estimated 42% fewer people would be eligible for mobility allowance as a result.

In exchanges in the House of Lords last week, Crossbencher Baroness Grey-Thompson, a Paralympic gold medallist, criticised the government for its "lack of consultation with disabled people" about the proposals.

Fellow crossbencher Lord Alton has said the fact people will have specially adapted vehicles taken away from them had caused "widespread disbelief and considerable distress".

For ministers, Lord Freud conceded: "I have to accept that there was inadequate discussion of the changes and that there is inadequate understanding of them."