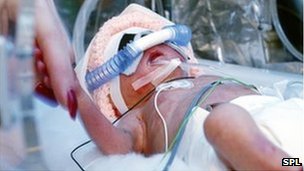 The causes of premature birth are poorly understood

Calming the immune system will be a vital part of preventing premature labour, say UK academics.

They have shown that inflammation, part of the immune response, overrides drugs which might halt labour in its tracks.

Their study, published in the Journal of Biological Chemistry, showed inflammation in the uterus turns off genes which hold labour back.

Other experts said the study unravelled some of the complexities in early labour.

In the UK about one in every 13 babies is born too soon. The earlier they are born, the greater the risk they will not survive their first few days and the higher the chances of developing disability.

However, the reasons why labour starts, early or otherwise, are poorly understood. Some drugs can briefly slow the process down.

Researchers at the University of Sheffield were testing how inflammation affected experimental drugs, called histone deacetylase inhibitors, which can turn genes on.

In tissue samples they showed the drugs activated genes which relaxed the womb and stopped contractions.

However, the chemicals produced during inflammation then turned the relaxing genes back off.

One of the researchers, Dr Neil Chapman, said such drugs would probably fail unless inflammation was targeted as well.

This study is really clever, it unravels the complexities and explains why current treatments are ineffective and that gives us hope”

He told the BBC: "We really don't know what causes a woman to go into labour, essentially after her womb has had nine months gestation, how does it know 'Game over, time to start contracting'?

"The process of human labour is such a big process that it is likely many cell functions must be controlled simultaneously: all the genes saying 'relax' being turned off and everything saying 'contract' being turned on.

"If inflammation is part of that process then drugs will need to target that as well.

"Due to the complexity of the whole process, however, it's not going to be like a light switch that we can just turn on or off."

Prof Siobhan Quenby, a spokesperson for the Royal College Obstetricians and Gynaecologists, said: "This study is really clever, it unravels the complexities and explains why current treatments are ineffective and that gives us hope."

She also said research into the process of labour may be used to devise therapies for people who struggle to go into labour as well.