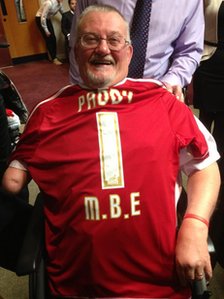 Paddy Cronesberry was "totally speechless" when he heard the news

A man who helps dozens of disabled football fans get to matches has been officially made an MBE.

Paddy Cronesberry, from Thornaby, Teesside, the chairman of the Middlesbrough Disabled Supporters' Association (MDSA), was appointed MBE for services to the disabled in sport.

"It was a total surprise and I thought it was a wind up, I was totally speechless, I still am to be honest," he said.

He received his medal at Buckingham Palace on Thursday.

The 61-year-old, who has been in a wheelchair since childhood, said he had "even given his chair a wipe" for the big day.

"I want to express how grateful I am for all of the thanks and well wishes, I've been inundated with emails and my phone has never stopped," he added. 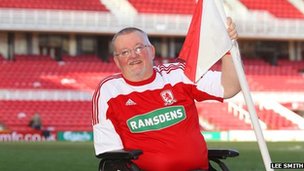 Paddy Cronesberry was named Championship fan of the year in 2012

Mr Cronesberry was born with one arm and no legs and was not expected to live beyond childhood. But despite his disability he has worked all his adult life to support his wife and family and currently works for the civil service.

He attended a school for people with disabilities and to "give something back" he helps them with fund raising for equipment.

"I was there for 11 years so it was like they were an extended family," he said.

"I've been going back every year since, for 40 years or so, and from there I got involved with different charities and other fund raising."

Mr Cronesberry is a founding member of the MDSA which was formed in 1990 and arranges tickets and transport for disabled fans, many of whom would be unable to go to matches without the support.

He was included in the New Year Honours List at the end of last December.

He was named Championship fan of the year and carried the Olympic Torch in 2012.