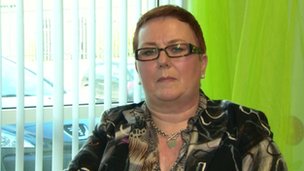 Sharon McCreight from Mencap said the decision needed to be reviewed

A charity has said it is shocked by the government's decision to change benefits for severely disabled children.

Mencap said it will mean more reassessments and confusion among families.

At present, such children are entitled to Employment Support Allowance. It pays £56 per week for three years once they reach their 16th birthday.

Under the cuts they will only receive it for a year.

What happens after that remains unclear.

Sharon McCreight is a family support worker with Mencap.

"There are 3,000 young people who are on ESA youth - that includes young people who don't have a disability. In the overall welfare bill it is a very small amount of money that needs to be paid out but changing it will have a real financial impact on families," she said.

"I think when you see the impact it has on families and it has for a young person as well, I think for anyone to take that away from them well, I think it needs to be reviewed."

Jordan Graham from Larne has just turned 16 and has applied for the benefit.

He has autism and a limited ability to communicate. 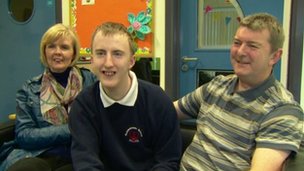 Jordan Graham, seen here with his mum and dad, is one of the young people who will be affected by the cuts

His father Colin is stunned the benefit is changing.

"With Jordan's disabilities there is no way he can go and earn his own money. What I do know is that it is going to have a big impact on his life and his family."

"We have three boys and the other two are able to get part-time jobs to earn money. Jordan can't do that. He loves music and we pay for him to have music therapy every week," she said.

"We also have to go with him everywhere he goes so that makes life expensive too. We both work, but I cut my job to part-time to look after him."

The Department of Social Development said it is "currently reviewing cases for those young people who are likely to be impacted by this change and will offer advice and support, including assessing their entitlement to other benefits".

"The department has been working to ensure there is a minimal impact on young people here and early indications suggest that this will be the case. The department is due to publish figures on the local impact of changes to ESA shortly."