HomeNewsBudget 2013 is time to change direction 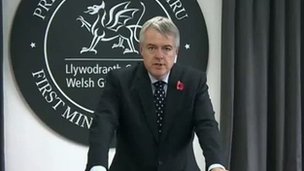 He added that benefit reforms put a burden on the most disadvantaged.

The Treasury said the UK government had a "credible plan" for low interest rates and to restore public finances.

Mr Jones said economic growth was sluggish and the UK's triple A credit rating had been lost - "the very yardstick the chancellor asked us to measure him on".

"We know that austerity hasn't led to growth. It's time for a change of direction," Mr Jones told journalists at his monthly news conference in Cardiff.

Welfare reform would take "at least £590m" out of Wales, he said, adding: "There's little evidence that these plans will raise employment.

"They will simply reduce the spending power of many families, taking money out of the Welsh economy."

In addition, the Welsh government estimates around 42,500 people in Wales will lose their entitlement to disability living allowance which will be phased out from April and replaced by a new benefit called personal independence payments.

In a cabinet reshuffle last week Mr Jones appointed Huw Lewis as the minister for communities and tackling poverty.

"The present policy has failed and I urge the chancellor to bring forward a major programme of infrastructure projects and other activities that will stimulate the economy," he said.

"We believe the time has come for the chancellor to face the facts and plot a new course for our economy before it's too late."

His call echoes a debate within the Westminster coalition, where Liberal Democrat Business Secretary Vince Cable has suggested taking advantage of low interest rates to finance capital spending that pays for building and infrastructure projects.

Mr Jones said the Welsh government has a list of capital schemes that could be "accelerated if additional resources were available".

He added: "As far as we are concerned he needs to be able to borrow enough money to accelerate the projects that we have in Wales. In terms of generally across the UK that's a matter for him to assess.

"It's in the billions, clearly. But we know, history teaches, us that where you borrow to invest - particularly when the costs of borrowing are as low as they are at the moment - you can stimulate the economy and that means of course the economy would grow and then you start looking at paying off debt."

A Treasury spokesman said: "The UK is recovering from a decade of debt, and the most damaging financial crisis in generations.

"The government has set out a credible plan to restore the public finances, securing low interest rates for households and businesses.

"Though the road ahead may not be smooth, as the Governor of the Bank of England has said, there are signs the economy is healing: the deficit is down by a quarter over two years and more than a million private sector jobs have been created."

Creating infrastructure to boost growth was a priority, he added, with plans to increase capital expenditure and cut red tape.