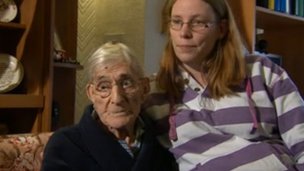 A terminally ill man who campaigned for assisted dying to be legalised has died after refusing to eat food.

George Martin, 86, was diagnosed with terminal lung cancer three weeks ago after being ill for two years.

Campaign group Dignity in Dying said Mr Martin, from Nottinghamshire, should not have had to stop eating to have control over the end of his life.

Assisting a suicide is illegal and the issue is highly controversial.

Mr Martin, who lived in Westwood, near Selston, had been a member of Dignity in Dying since 1995.

The group advocates assisted dying for terminally ill people. This used to be known as voluntary euthanasia.

Mr Martin's daughter, Sara Martin, said her mother died in 1992 of a brain tumour and her "traumatic" illness prompted her father's interest in voluntary euthanasia.

BBC East Midlands Today reporter Jo Healey, who interviewed Mr Martin last week, said his last words to her were: "Never forget me till there's a change in the law."

Ms Martin said her father, a retired accountant, stopped eating to "hasten his death in the absence of any law change" and drank only tea and water.

"My father believed very strongly that he should be able to select the time and place of his death so that he would not suffer or be a burden to others," she said.

He died on Tuesday morning.

A spokesperson for Dignity in Dying said: "George Martin was a courageous campaigner, and we are saddened to hear of his death.

"As a result of his decision to speak out, more people are talking about whether it's right that terminally ill people are forced into taking desperate decisions at the end of their lives in order to avoid a potentially bad death, or whether there is a better way."

Care Not Killing spokesperson Alistair Thompson said: "The Royal College of Psychiatry in their evidence to the Director of Public Prosecutions was very clear: if someone is suicidal, they need help and support, not the keys to the drugs cabinet.

"The current law exists to protect the vulnerable, and to protect those who might feel because of their condition or disability that they are a financial or a care burden."