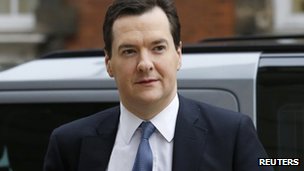 Chancellor George Osborne is to defend benefits and tax changes, saying "this month we will make work pay".

In a speech, Mr Osborne will say about nine out of 10 working households will be better off.

The shake-up, including cuts to housing benefit for some social housing tenants with a spare room and alterations to council tax, took effect on Monday.

Some churches, charities and campaign groups, as well as the Labour Party, have criticised the changes as unjust.

This month saw the start of sweeping changes across public services including reform of the benefits system.

Mr Osborne argues that the government has had to take difficult decisions to cut the deficit and the current benefits system is fundamentally "broken".

The chancellor believes the changes to benefits and tax will be fairer and help ensure that the country can live within its means and compete globally.

He also believes the changes have support, saying those who do not agree with him are on the wrong side of the public.

What is happening when?

Labour says the reforms will hit the poorest 10% of people hardest while those in the top 10% will gain.

"This month, around nine out of 10 working households will be better off as a result of the changes we are making. This month we will make work pay."

He will add: "Now, those who defend the current benefit system are going to complain loudly. These vested interests always complain, with depressingly predictable outrage, about every change to a system which is failing.

When asked if he could live on £53 a week, in response to a question posed by a working benefits claimant, Mr Duncan Smith said: "If I had to I would."

Labour's shadow Treasury minister, Chris Leslie, said for millions any gain from the rise in the personal allowance was "far outweighed" by cuts to tax credits, child benefit and the VAT rise.

"While millionaires get an average £100,000 tax cut this week IFS figures show that the average family will be £891 worse off this year because of tax and benefit changes since 2010," he said.

"The benefits bill is rising under this government because our economy is flatlining, prices are rising faster than wages and unemployment is high. And it is this government's cuts to tax credits which have left thousands of working parents better off if they quit their job.

"The best way to get the benefits bill down is to get our economy growing strongly and get people back to work."