HomeNewsFirst deaf person to sail round the world 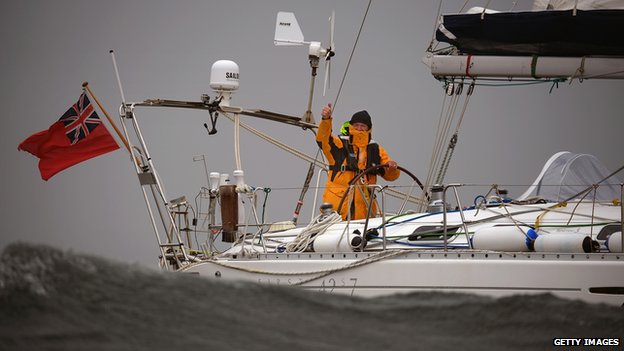 A Scottish teacher has become the first deaf person to sail single-handed around the world past all five capes.

Gerry Hughes, 55, from Glasgow, sailed from Troon in his boat Quest III, on 1 September last year.

His solo-circumnavigation lasted eight months and covered more than 32,000 miles, during which time he endured a capsize and equipment problems.

After arriving back at Troon marina on Wednesday, Mr Hughes said he had finally achieved a life-long ambition.

Gerry's determination and courage throughout his life to overcome his disability is truly inspirational and will teach young people, deaf and hearing, that they can overcome any obstacles they face in life”

"The last eight months have been amongst the toughest of my life but despite all the challenges of the expedition, it has been a period I have thoroughly enjoyed," he said.

"Sailing has always been my first love and it provided a real escape from my deafness when I was a youngster.

"Now, I hope that following and completing my dream can encourage young people who face similar difficulties to see that their hopes and aspirations can still be fulfilled through belief and hard work."

Mr Hughes, who teaches deaf pupils at St Roch's Secondary School in Glasgow, said the support he had received had played a "huge part" in completing his voyage.

He also said it was "wonderful" to be back with his wife and daughters who had "undoubtedly endured as many highs and lows" as he had.

Updates on Mr Hughes' journey were supplied throughout the voyage to almost 3,000 followers on his Facebook page.

The sailor's website also allowed visitors to track his progress.

His achievement now sees him join an elite list of about 300 people who have completed solo-circumnavigation sails. 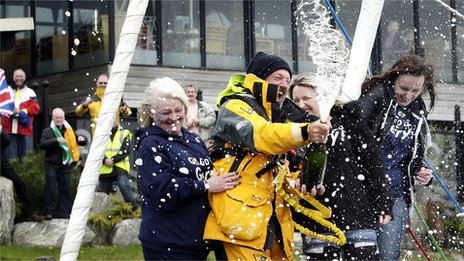 Sir Robin Knox-Johnston CBE, the first man to perform a single-handed non-stop circumnavigation of the world in 1969, said: "Reading Gerry's blog brings back some cold, wet and uncomfortable memories. It is such a relief when you clear Cape Horn and turn north."

He added: "The easy things are not worth doing. Where is the satisfaction from achievement? It is the difficult things we take on that bring us pride and is real achievement."

Mr Hughes' other achievements include becoming the first deaf person to sail around the British Isles in 1981 and the first deaf skipper to sail across the Atlantic Ocean in the Original Single-Handed Transatlantic Race OSTAR in 2005.

Sport Minister Shona Robison said: "To sail round the world single-handedly is achievement enough - to do so when profoundly deaf is just incredible.

"Gerry's determination and courage throughout his life to overcome his disability is truly inspirational and will teach young people, deaf and hearing, that they can overcome any obstacles they face in life."