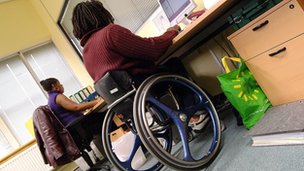 The fit to work tests have sparked protests from disability campaigners

A doctor who worked for the private company which assesses people for disability benefits says its methods are "unfair".

Greg Wood, a former Royal Navy doctor, resigned from Atos earlier this month, after working as an assessor for two-and-a-half years.

He told the BBC the system was "skewed against the claimant".

Atos, which has been criticised in the past by disability campaigners and MPs, carries out work capability assessments (WCAs) on behalf of the Department for Work and Pensions (DWP).

Claimants have to score a required number of points in order to qualify for the full sickness benefit under the Employment and Support Allowance (ESA).

In a statement, Atos said: "We never ask healthcare professionals to make any changes to a report unless there are specific clinical quality issues identified within it.

"We do not deviate from government guidelines in our training. We do not have targets for getting people on or off benefits.

"We have a large team of fully trained doctors, nurses and physiotherapists who provide a professional and compassionate service through what we recognise can be a difficult and emotional process for people."

In an interview with the BBC, Dr Wood says he believes Atos assessors are not free to make truly independent recommendations.

He said he felt compelled to speak out because it was "embarrassing to be associated with this shambles". 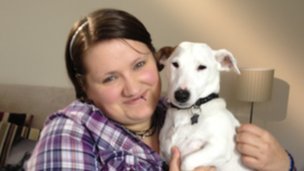 Ema Hackett, 24, has a mid-range disability and is unable to work. A trained graphic designer, she has Hypermobility Syndrome which makes her joints abnormally flexible. She lives with chronic pain and also suffers from mental health problems.

She has a carer who comes in once a day to help with household chores and cook her dinner.

In the past three years, she has twice been rejected for full sickness benefit following assessments and twice she's successfully challenged the decision through Atos' internal appeal system.

"It feels like not only am I fighting my body to get up every day, but I'm also fighting the system to get the money I need just to exist.

"I don't have a frivolous life. I don't really ask for much - I just want enough to live a normal life.

"It's very unfair on the people making claims, they deserve a fair assessment and as a taxpayer I'm pretty cheesed off about the £100m plus that's being sprayed away on this dog's breakfast," he said.

The assessments - or fit to work tests - were first introduced for new claimants in 2008 by the Labour government. Following pilot schemes, in 2011 the Coalition extended the scheme to reassess those who had been on the old incapacity benefit. Their introduction sparked protests from disability campaigners.

Dr Wood has criticised some of the tests which he says contain "dubious concepts and shaky reasoning".

He claims assessors are told that if a claimant can walk from the kitchen to the sitting room, it proves they can walk 200m (650ft); and if a person can dress themselves once during the day that is proof they have enough concentration and motivation to hold down a job.

He insists these rules are not published in handbooks and guides, instead they are simply spoken about in training sessions.

Atos senior vice-president Wayne Gibson said the rules detailed by Dr Wood were incorrect and several questions were asked to build up a complete picture, alongside the medical evidence.

Dr Wood, who was given special responsibility to champion mental health at Atos, said: "I was instructed to change my reports, to reduce the number of points that might be awarded to the claimants. I felt that was wrong professionally and ethically.

"My view is the government has tried to catch more people in the net than the current test allows by pulling strings behind the scenes to get the result they most desire," he added.

Mr Gibson said a report was only changed if there was insufficient medical evidence to back it up.

There were "no targets to take people off benefits" and that had always been the case, he added.

Dr Wood says the people being most adversely affected by the system have significant, mid-ranging disabilities, such as Parkinson's disease, mental illness, and head and spinal injuries.

He also claims some of the most severely disabled people are being asked to attend face-to-face assessments, instead of the normal practice of examining their application on paper.

He says he saw a lot of people who had suffered severe strokes and brain damage.

"There was a man with a motor neurone condition who I actually put in the terminal illness group," he said. "He should not have come for a face-to-face assessment. It was cruel and he was hopping mad."

The DWP said between March and May 2012, 58% of decisions to award the full sickness benefit were made on paper only, so did not require a face-to-face assessment.

Employment minister Mark Hoban says the evidence speaks for itself.

"When we came to office one in 10 people were getting the highest level of support. That has now gone up to three in 10," he told the BBC.

"What's important to me is to make sure the decisions which are made are good quality decisions and people are getting the right support."

He said the assessments had undergone several independent reviews and were devised in conjunction with health professionals and charities.

"The percentage of people entitled to ESA is now at its highest level with over half of people completing an assessment eligible for the benefit," a DWP spokesman added.

Labour MP Tom Greatrex, who has asked a series of Commons questions on the assessments, said Dr Wood's allegations were "serious and shocking" and he had written to the prime minister asking for an investigation.

"They need to get a grip on this chaotic process which is not only causing misery for some of the most vulnerable members of our society, but also costing taxpayers a fortune at a time when we can least afford it."

Atos senior vice president Wayne Gibson told the BBC it was "surprised and concerned that someone thinks we are unethical".

"We don't make the decision about who gets a benefit or not.

"Our role in the process is to do an assessment, gather the medical evidence and write a report that goes to the department, upon which they can gather more evidence and make a decision."

In a later statement, the company said the claims were "false and damaging".

It added: "Clinical judgement is the foundation of our part of the Work Capability Assessment process. We send the DWP independent, clinically justified reports to help the department's decision makers make a decision on benefit entitlement...

"We are a professional and ethical organisation which has carried out this work on behalf of the department for over a decade.

"Atos Healthcare conducts its business based on a code of ethics and a strong legal compliance culture."