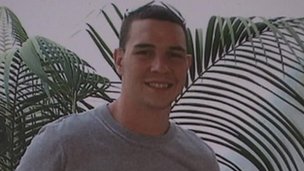 A Coventry family whose disabled son died in prison is seeking reassurances over the future welfare of other inmates in need of medical care.

Kyal Gaffney, 22, died from a brain haemorrhage in November 2011.

He was already suffering from a number of health issues relating to a fatal car crash which led to his jail term.

His family say he did not receive the necessary care. The prison service said it had now improved care at HMP Hewell in Worcestershire.

A recent inquest into the 22-year-old's death found opportunities were missed over the diagnosis of leukaemia that led to his brain haemorrhage while in prison.

Mr Gaffney was driving when his car hit a tree in July 2010, killing his friend Devland Barnes-Bromfield, 19.

He suffered injuries that left him disabled and was subsequently jailed for 21 months for causing death by careless driving while under the influence.

His mother, Mary Currie, said it had been "distressing" watching her son's health deteriorate in prison.

She said: "He had all his paperwork there about his medicine, about his disability, and that information wasn't inputted or it wasn't shared to prison officers and the chaplaincy." 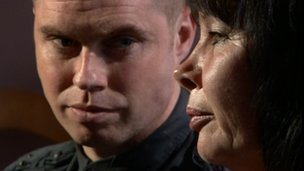 Gaffney's family hope the prison will improve standards of care

Ms Currie said her son needed to take "a big cocktail of medicines" including morphine and antidepressants.

The prison's attempts to deal with her son's healthcare and disability needs were "a catalogue of errors", she claimed.

"The third week we went to see him I was absolutely stunned - I was shocked.

"He could hardly walk, his breathing was laboured, he was so poorly I just wanted to go over and help him," she added.

Mr Gaffney's brother, Adrian Sheridan, said there was "zero communication" between the people who were responsible for his sibling's medical care, and the people who dealt with him on a day to day basis at the prison.

Mr Sheridan said: "I don't think any one individual is responsible for what went on there [but] there's no process for communication between those parties.

"We understand that Kyal had to face punishment for what he did and I agree with the justice system and the way it works, but I think the failings of that prison in particular make it an unfair sentence."

Last month an HM Inspectorate of Prisons report said conditions at HMP Hewell had "deteriorated sharply" and Ms Currie is seeking reassurances the points her family have raised will be taken into consideration.

"I don't want to see this happen to another family or another person," she added.

A Prison Service spokesperson said: "Since the prison's inspection we have taken decisive action to make improvements.