HomeNewsA councillor who said disabled children should be put down 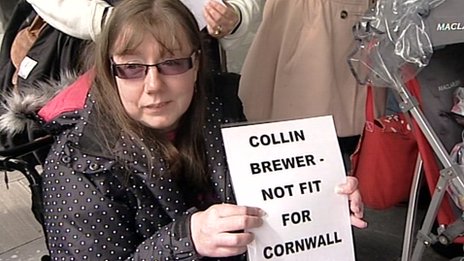 Protesters at Cornwall Council called for Collin Brewer to step down

A councillor who said disabled children should be "put down" should resign, the new chairman of the council has said.

Collin Brewer, who made the comments in 2011, was re-elected to Cornwall Council at the election on 2 May.

Mr Brewer, 68, a Wadebridge councillor, was unavailable for comment. He previously said he had been ill.

In an interview following his re-election earlier this month, he apparently also linked disabled children to farmers killing deformed lambs.

Mr Wood, leader of the Independent group on the Liberal Democrat-Independent controlled authority, spoke outside the council headquarters in Truro where protesters called for Mr Brewer to step down. 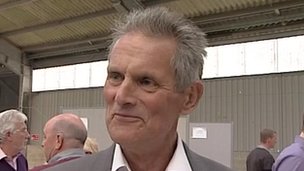 In 2011, Mr Brewer, an independent councillor, told a charity worker "disabled children cost the council too much money and should be put down".

Cornwall Council is investigating Mr Brewer's remarks to see if there has been a breach of its members' code of conduct.

Mr Brewer's remarks were allegedly made during an interview with the Disability News Service (DNS).

In an article published on its website, DNS said Mr Brewer "repeatedly indicated that he believed there was a good argument for killing some disabled babies with high support needs, because of the cost of providing them with services".

Following the publication of the article, Mr Brewer told BBC News he valued all human life and his views had been taken out of context.

"I didn't intend to offend anyone and people will know that I really am a good man and I was just indicating an example of what's happened in the past," he said.

"I've always said I'm a Christian and I believe in the sanctity of all life."

Mr Brewer is being investigated by police after complaints about the DNS interview.

Cornwall Council confirmed Mr Brewer had not attended any council meetings since his re-election this month.