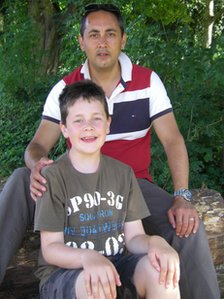 Tony Clarke said he was "overjoyed" with the tribunal's decision

The parents of a boy with autism have won their legal battle to have him taught at a private school in Suffolk.

Heather and Tony Clarke said the needs of their son Alex, 13, were not being met at Needham Market Middle.

An education tribunal hearing in Ipswich ruled the county council should pay for specialist schooling in Brettenham in Suffolk.

Alex, who is due to go to secondary school in September, has a range of conditions including autism, attention deficit hyperactivity disorder, dyspraxia, dyslexia and auditory processing difficulties, said Mr and Mrs Clarke.

The decision made by the Special Educational Needs and Disability Tribunal at Ipswich Magistrates Court, which will allow Alex to attend the Centre Academy in Brettenham, followed an 18-month legal dispute.

Mr Clarke said: "We've got a big legal bill, but it's been worth it just to give Alex a chance of living an independent adult life.

"Needham Market Middle have been supportive and tried their best, and Stowupland High would have as well, but they wouldn't have been able to fulfil his needs.

"Brettenham specialises in teaching about 50 children like Alex and he'll be able to learn a lot more because there will be fewer distractions and he'll have access to speech, language and occupational therapists which he wasn't getting enough of."

A council spokesman said: "We will be implementing the decision of the tribunal and Alex will be going to the Centre Academy, Brettenham in September."

The Clarke family said it would not be seeking to claim the costs of the legal dispute with the authority.