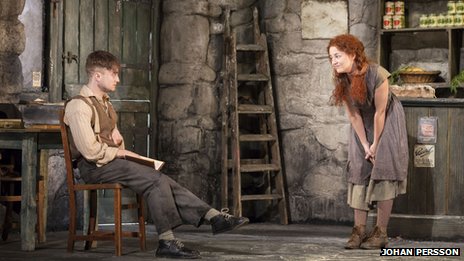 Daniel Radcliffe has impressed critics with his "understated" performance as a disabled orphan in The Cripple of Inishmaan.

The Harry Potter star has returned to the London stage in Michael Grandage's revival of Martin McDonagh's 1996 play.

"It's a knowing play but one which Radcliffe invests with a sense of real feeling," said Michael Billington in his four-star Guardian review.

The play runs at the Noel Coward Theatre until 31 August.

In the story, set in 1934, disabled teenager Billy Claven (Radcliffe) lives with his "aunties" on the isle of Inishmaan off the west coast of Ireland. 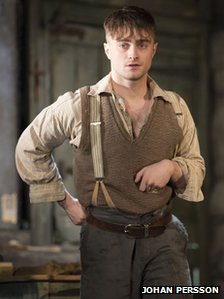 Constantly mocked by the islanders, he survives the tedium of daily life by reading books and staring at cows. But the arrival of a Hollywood film-maker on a neighbouring island offers him a chance of escape to a glamorous new life.

"With his twisted left arm and inflexible left leg, he suggests Billy's disability without overstating it," said Billington.

"Radcliffe also has the precious gift, vital in a play full of narrative surprises, of seeming artful and vulnerable at the same time."

"Radcliffe brings a touching stoicism and simplicity to his performance as Cripple Billy, all the more moving because it is so understated," he said.

"It is surprising to find Michael Grandage directing this black comedy, as he is normally the most humane of directors. But it has to be admitted that the piece is theatrically effective, outstandingly acted and often disgracefully funny."

In the Daily Mail, Quentin Letts said Radcliffe shared the stage with "a beltingly good Irish cast who bejabber and begorrah away in Martin McDonagh's zany take on Oirishness".

"Mr Radcliffe just about survives as Billy. Given the talent he is alongside in Michael Grandage's confident production, that is an achievement."

Paul Taylor, in The Independent, pointed out Radcliffe "may not have the most convincing Irish accent". But he praised the 23-year-old actor's "honest, sensitive, unshowy performance". 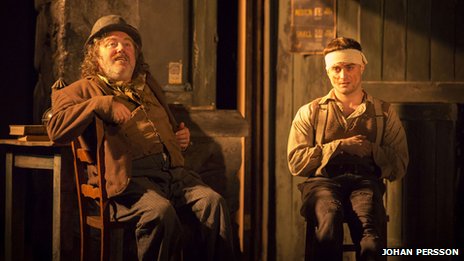 In the Standard, Henry Hitchings highlighted the strengths of Radcliffe's fellow cast members, with particular praise for Gillian Hanna and Ingrid Craigie as Billy's adopted aunts as well as Pat Shortt's Johnnypateenmike and his mother, given "a sour fierceness" by June Watson.

"There are plenty of laughs - many of them guilty ones - along the way. And Radcliffe's desire to challenge himself is admirable, as is his refusal to milk his part and instead deliver a performance of moving modesty," he added.

The Arts Desk's Veronica Lee was less impressed with the performance by the former boy wizard.

"Although it's an ensemble piece, Radcliffe - not yet free of Harry Potter references despite his West End and Broadway successes, but he's getting there - is the marquee attraction here, yet turns in a lacklustre performance in a play brimful with deliberately showy characters."

The Guardian's Billington, however, concluded that "the evening belongs to Radcliffe, who has successfully escaped from the Potter's wheel".