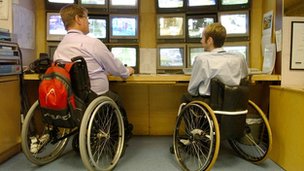 Nine Remploy sites across Scotland and England are to be closed, the UK government confirmed

The five remaining Remploy factories in Scotland are to close, the UK government has announced.

The businesses affected are the Marine and Frontline Textile factories at Leven, Cowdenbeath, Stirling, Dundee and Clydebank.

The government also said no viable bids had been made for packaging factories in Norwich, Portsmouth, Burnley and Sunderland.

More than 230 disabled people across the country face redundancy.

The Department for Work and Pensions (DWP) said all 137 disabled employees at the five factories in Scotland would be given tailored support from an £8m package to help with the transition to mainstream employment.

The DWP later said Remploy would invite expressions of interest to take over the running of the remaining factories.

In a Commons statement, Work and Pensions Minister Esther McVey said three businesses across nine sites would close, which was likely to result in one third of Remploy's workforce losing their jobs.

Ms McVey said some sites would remain commercially viable, but there were no substantial bids for a number of factories.

She told the Commons that 234 disabled people now at risk of redundancy would take part in individual consultation with Remploy.

She said: "Despite having had considerable interest in the Marine and Frontline Textile businesses at Leven, Cowdenbeath, Stirling, Dundee and Clydebank, Remploy did not receive a best and final offer for these businesses as part of the commercial process.

"Additionally, there are no viable bids for the packaging business based at Norwich, Portsmouth, Burnley and Sunderland.

"These sites will now move to closure and all 284 employees at the Packaging, Frontline and Marine Textiles businesses, including 234 disabled employees will, in line with Remploy's redundancy procedures, be invited to at least two individual consultation meetings over the next 30 days to discuss the options and the support that will be available to them."

She added: "We will continue to do everything we can to support them in finding new jobs."

The Scottish government said the news was "another blow" for the workers who had been living under the threat of redundancy for more than a year.

Enterprise Minister Fergus Ewing said: "Throughout the last year I have urged UK ministers to think again about the process they had undertaken and to consider the impact on the employees, many of whom have worked in Remploy all their adult lives.

"At the most recent meeting of the taskforce I set up last year to advise me on Remploy, members highlighted again the very high levels of stress staff were working under and hoped there would be an early resolution to this matter."

Mr Ewing said there was a potential buyer for the Scottish businesses and the Scottish government would seek to work closely with the organisation to help preserve as many jobs as possible.

He added: "I spoke with Esther McVey this morning and urged that the potential asset sale be completed as quickly as possible to avoid the loss of any business for the new company that would put further jobs at risk.

"We also agreed that we must redouble our joint efforts to help those affected by this announcement and the earlier closures to find new jobs."

Anne McGuire, Labour's Shadow Minister for Disabled People, claimed the UK government's record on disability was "nothing short of a disgrace".

She added: "The vast majority of the disabled workers this government has already sacked from Remploy are still out of work, and disability unemployment is still higher than in May 2010.

"It will be a matter of great regret that the UK and Scottish governments could not come to a deal which would have saved the jobs in Leven, Cowdenbeath, Stirling, Dundee and Clydebank, most of them in areas of higher than average unemployment."

Last month, MPs accused the UK government of taking an "inflexible approach" over the future of Remploy factories.

A report by the Scottish Affairs Committee claimed the Department for Work and Pensions (DWP) had helped only to hamper the prospects, in particular, of Remploy Marine in Fife.

It called on the UK government to instruct Remploy to extend the timescale for bids for the business.

The DWP said at the time that its priority during the process was to safeguard as many jobs for disabled people as possible.