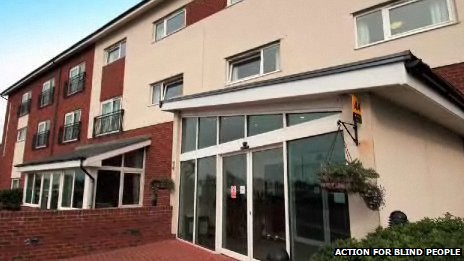 The hotel, which opened in 2002, was purpose built for blind and partially sighted people

The Russell Hotel in the seaside resort of Bognor Regis was the first hotel in the England to be purposely built for blind and partially sighted people.

Talking clocks in rooms, beds for guide dogs, rails along the extra-wide corridors and a textured carpet to guide people to the reception are among the features enjoyed by guests.

But, 11 years after opening, the groundbreaking hotel is set to close as its owner, Action for Blind People, has decided to sell it.

The charity has accepted an offer from the national disability charity Livability, which wants to redevelop the hotel so that residents of its care home in Bognor, West Sussex, can move into more modern accommodation.

The hotel has a swimming pool that can be used by non-residents, a fitness centre, restaurant and lounge.

A campaign has now been launched to try to save the hotel. 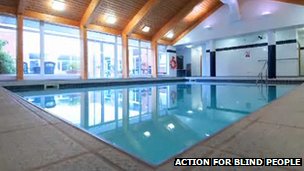 Its organiser Paula Campbell is neither blind nor partially-sighted.

She said: "The reason I'm fighting this is as we were coming out of the pool, a lady in a wheelchair - partially blind - just burst into tears and said that she came down from Wimbledon four times a year to stay in this hotel.

"It's a lovely atmosphere and it's just a crying shame that along this part of the south coast, there is nothing to match it."

Tony Poland, chairman of Aldwick Parish Council, added: "Bognor wants to try to attract businesses and people to the area so that it becomes a vibrant place.

"There are plans to regenerate Bognor and I think if the Russell Hotel disappears, it's just another nail in the coffin."

Action for Blind People has three other hotels, in Devon, Somerset, and the Lake District.

Miriam Martin, the charity's director of development, said the decision had not been made lightly.

"It's always really difficult when you're going to be taking something away from people," she said.

She said the hotel had been attracting "far fewer" blind and partially sighted people in recent years.

"I know there will be people who will be really upset by this decision.

"I would say that we have three other lovely hotels and if there is any way that we could talk to you about how we could perhaps support you to access those hotels we'd be very happy to do that."

The charity said the money from the sale would be used to provide more support for blind and partially sighted people.