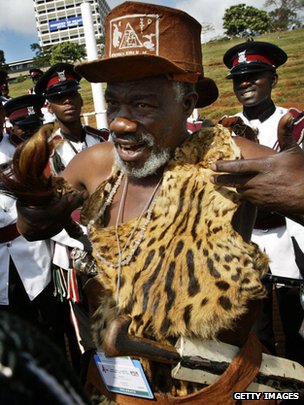 Traditional healers provide an important service in many cultures

When most people seek help for mental health problems they don't expect to be beaten on the head or tethered by a rope.

Yet that is what has been happening in places like Kenya.

But now healers are being recognised as a valuable resource in countries where both hospitals and psychiatrists are scarce.

Daniel Gichohi, a trainer with Basic Needs, an international development charity focussed on mental health issues, has witnessed first-hand patients being whipped, tethered by a rope, or chained up.

He told the BBC that beating people on the head in the name of exorcising demons or placing hot objects on the body of the patient were common procedures used by some traditional healers. More seriously, he says, other procedures have included lobotomies.

Daniel has been working with a group of witch doctors and faith healers in Kenya over the past three years, educating them in patient protection and human rights. He also provides training in how to identify mental health problems and which patients should be referred to psychiatrists.

But encouraging traditional healers to work with psychiatrists is not a one-way street.

Now psychiatrists in Kenya are recognising the need for some of their patients to seek more traditional help, and accepting the presence of healers in a mental health care system.

Dr Monique Mutheru is one of just 25 psychiatrists in Kenya. She sometimes refers patients she sees in her medical practice to traditional healers and thinks that particular types of mental distress might be especially suitable for treatment with traditional approaches.

Cultural beliefs around the causes of mental illness, such as spirit possession or failure to honour forefathers, can sometimes fuel psychological distress. And giving patients the option of seeking traditional help can prove beneficial.

Dr Mutheru suggests that one condition suitable for traditional help is conversion disorder, once more-commonly known as hysteria. It is a stress-induced syndrome in which psychological problems are expressed as physical symptoms, such as numbness, blindness, paralysis, or fits.

Other conditions, such as psychosis or epilepsy, she says require an entirely biomedical treatment including medication and regular check-ups. She says it really is a matter of weighing up the patient's particular circumstances and symptoms.

However, Dr Mutheru doesn't believe that treatments should be an 'either-or' choice. She refers patients undergoing biomedical treatments to healers when they feel that they need "cleansing" or additional reassurance. But, she emphasises, they should continue to taking their prescribed medication whilst they see traditional healers.

The World Health Organisation (WHO) estimates that mental and neurological disorders are the leading cause of ill health and disability globally.

It also says that mental health issues should be part of a larger development agenda since they have a drastic economic impact by adversely affecting people's ability to work and take care of their family and themselves.

With so few psychiatrists in Kenya, and the majority of those concentrated in urban areas, most of the 41 million population cannot easily access biomedical treatments.

Professor Vikram Patel, Wellcome Trust Senior Fellow with the London School of Hygiene and Tropical Medicine and the Sangath Centre in Goa in India, believes that filling that treatment gap requires innovative thinking.

In very low resource settings one has to think out of the box.”

Trying to imitate systems in the West is tricky, he says, when both specialists and hospitals are in short supply. Instead Professor Patel proposes that non-specialist healthcare workers, such as traditional healers who are much more accessible, be welcomed into the front-line of mental health provision.

"In a healthy ecosystem of mental health care, you would have traditional and biomedical approaches co-existing with each other, really amplifying each system's strengths," he told the BBC.

"Clearly in very low resource settings one has to think out of the box about who can provide mental health care."

Seventy to eighty per cent of people with a mental health problem in developing countries receive either no treatment at all, or treatments which have not been shown to be effective, such as those provided by traditional healers.

That figure sounds shocking until compared with the global situation. Even in developed countries, more than half of patients with a mental health problem will either not receive any treatment or will seek alternative approaches without supporting evidence.

Embracing culturally appropriate practitioners is just one way of bridging that gap.

"There are huge variations in what is considered normal and abnormal in different cultures," says Dr Micol Ascoli, cultural psychiatrist at the Newham Centre for Mental Health in East London.

"I think we have to consider that in a globalised world explanatory models are also sometimes multiple. It's not like you either believe in spirits or you believe in mental illness. Sometimes you believe in both."

She believes that incorporating cultural beliefs into psychiatric care is important and she has, like Dr Mutheru, allowed her patients to also see traditional healers.

"There is increasing evidence that including the religious and spiritual dimension to the process of assessment and care is extremely positive. And I think psychiatrists are actually becoming increasingly sensitive to these aspects of their patient's life."