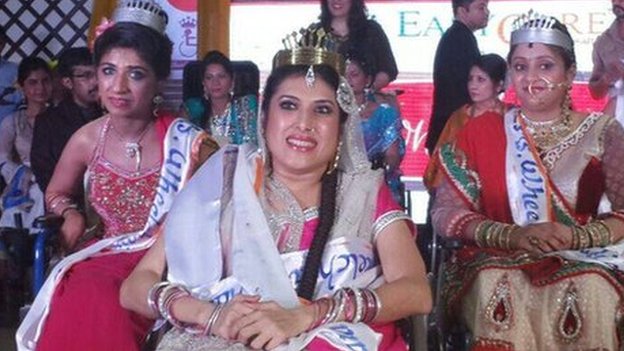 Neenu Kewlani is a communications professional and works for disability rights in India.

To secure more rights for people with disabilities, she makes frequent visits to courtrooms where the world of beauty contests is but a dream.

But the first Miss Wheelchair India contest in Mumbai in late November changed much of that.

She found herself amid the humdrum of the green room, glitter of the stage and the usual chatter one associates with a beauty pageant.

But there were some marked differences - the stage was much smaller than the ones set up for Miss India pageant and the contestants were treated as winners even before the event started.

Ms Kewlani's reply is an emphatic "no" when asked if the smaller stage and venue dimmed the importance of India's first Miss Wheelchair contest.

"Nobody really cared about how many people attended the event or how big the stage was. It was a night to celebrate the courage and fighting spirit of the contestants. We all won that night."

She says that her "rich and challenging" life has taken another positive turn after winning the contest.

"Polio made me wheelchair-bound early on in life but I never saw it as a disability and worked hard to be trained as a media professional like other normal people in the country.

"And winning the pageant is just another way of showing that disability cannot stop you from feeling and looking beautiful," the 41-year-old says.

Divya Arora feels her first runner-up crown has strengthened her belief that "beauty is boundless".

Ms Arora, who earlier worked for a leading newspaper, says her faith that "disability can never overshadow her beauty and abilities" helped her do well in the pageant.

The contest is the idea of tax consultant Sounak Banerjee whose life changed in 2006 when muscular dystrophy forced him to use a wheelchair to get around in the bustling city of Mumbai.

Mr Banerjee liked watching Bollywood films and TV shows but often found the absence of people with disabilities in the entertainment industry "disturbing".

"Disabled people are also consumers of the entertainment industry but they are seldom represented," he says. 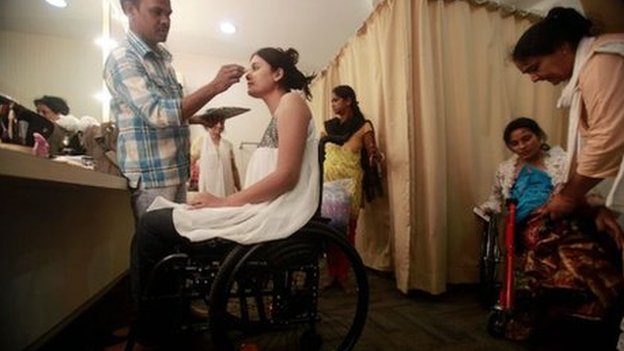 Contestants had to go through several rounds in the competition

He then came up with the idea of the Miss Wheelchair India contest to fill the gap and provide a platform they could call their own.

Planning the event was tough due to a lack of funding and human resources, he says but adds that the struggles were forgotten when the final day approached.

"I felt satisfied and happy when I saw these women wearing their best costumes and a winning smile. It all came together nicely in the end - I had done something for these courageous contestants," he says.

Ms Anand met with a road accident while studying engineering and was soon confined to a wheelchair. But she persevered, completed her course and found work as a scientist at a leading consumer manufacturing firm.

Shelly Bhutani, another contestant, hopes that the corporate world will take notice of the event in the future.

"I feel we too deserve to be in front of the camera and get brand endorsements like Miss India winners," she says.

Ms Arora, however, felt the organisers were not well prepared for the event and did not provide the kind of support she had hoped for.

Mr Banerjee accepts that a lack of sponsorship made the job of organising the event tough.

"I agree that there were problems at the event. We will work harder and hope that more people will support the event next year," he says.

But other contestants want to see change at a more basic level.

India is not known to be a disabled-friendly country as most public places, monuments and buildings do not have facilities catering to their specific needs.

Bhavna Sharma, who won the contest in a category that honoured people who are disabled but not necessarily confined to a wheelchair, says citizens with disabilities do not feel inferior and have achieved success in almost every field.

"But it's the country's poor infrastructure for disabled people that lets us down," the 27-year-old says.

Some years ago Neenu Kewlani travelled all over India in a chauffer-driven car to highlight the problems faced by those with physical challenges while commuting.

She says the problem is even more severe in rural areas and smaller towns where people with disabilities are virtually confined to their homes. Nearly every contestant expressed concern over a lack of sensitivity about disability rights. 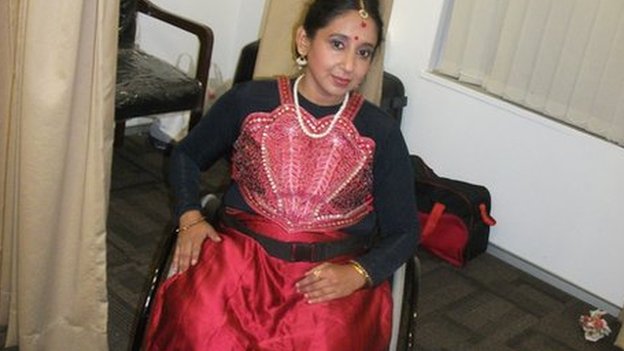 But not one of them is willing to give up hope.

Ms Kewlani says there is a long way to go in making India a disabled-friendly country but "we are not ready to give up as we are fighters".

"Facilities are improving in cities but we will continue to put pressure on governments to ensure they provide better opportunities and infrastructure for the disabled," she adds.

Calcutta-based Sarmistha Sinha says disability rights activists will have to continue fighting like other marginalised sections of the society.

An accident in 2006 confined the 41-year-old doctor to a wheelchair, but she says her "thoughts and ability to stay positive remained free".

Ms Sinha won in a category which honoured married women in a wheelchair. But winning was not everything for her as she wanted to use the platform to showcase her talent.

The wheelchair dancer saw the contest as an opportunity to present her skills and meet people like herself from all over the country. "I only wanted to dance as such opportunities are rare but the feeling that I have won a beauty pageant is slowly sinking in," she adds.

For Gopika Anand the real winning moment came when she saw her father's moist eyes as the results were announced.

"I was overwhelmed to see her with the crown. I am very proud today to be recognised as Gopika Anand's father," says Anand Mohan.