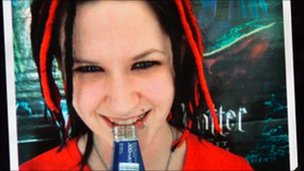 There were nearly 3,300 incidents of hate crime in Greater Manchester during a nine-month period last year, police said as they launched a crackdown.

Greater Manchester Police said the figures related to the period between April and December 2013.

A network of reporting centres is being expanded across Manchester at the start of hate crime awareness week.

The centres are safe locations where victims can report incidents to trained staff who can pass the details on to police.

Manchester City Council said 25 agencies had either signed up to become a reporting centre or indicated they would do so.

Greater Manchester Police was the first in England to record subculture hate crime from 2013, following the death of goth Sophie Lancaster, 20, who was beaten to death in a Bacup park in 2007.

Kirsty Mills, 21, from Walkden, who is deaf, had eggs thrown at her windows and front door and was confronted in the street by a 13-year-old boy, who called her names.

"He was calling our mother and we did not find it nice," she told the BBC. "He was using vile words and we had not had any problems on the street."

The boy was spoken to by police and later attended her home and apologised as part of restorative justice.

"Because of this, victims may be reluctant to report the crime or - worse still - may come to accept hate crime as an inevitable part of their lives."