HomeNewsCops and offenders with learning disabilities

Offenders with learning disabilities 'not supported' 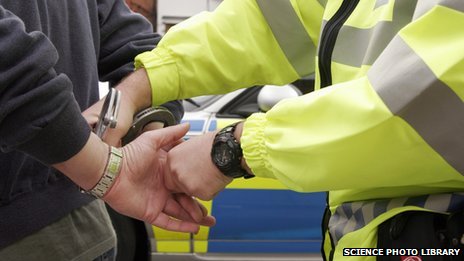 Offenders with learning disabilities are not getting the support they need from police, probation and prosecution services, an inspection has found.

Inspectors for the services, along with the Care Quality Commission, estimate 30% of those going through the criminal justice system have such conditions.

Their report found many police custody sergeants were not trained to spot conditions such as autism.

And most forces did not have access to medical or psychiatric help, they said.

There is no agreed definition across criminal justice and health organisations about what constitutes learning difficulties or disabilities.

A balance needs to be struck between the support needs of those with learning disabilities and the need to hold them to account, where appropriate, for their offending”

The report found that those with learning disabilities were often regarded as a problem to be processed - rather than a person with particular needs.

And it found those offenders were not receiving the support they needed to reduce their risk of harm to others or likelihood of reoffending.

But he added: "Such instances were exceptional and these deficits were mirrored across the criminal justice system.

"A balance needs to be struck between the support needs of those with learning disabilities and the need to hold them to account, where appropriate, for their offending."

The report found that, in two-thirds of the cases inspected, the CPS was not being provided, at key stages, with information about the offender's learning disability.

And it urged the agencies to come up with a common definition of learning disability and to make sure information on individuals was properly passed on.

"If offender engagement is to have any real meaning it has to start with an understanding of the offender's learning ability and style based on an effective screening of all offenders," Mr Fuller said.

"For those with a learning disability this is even more important as failure to identify and address their needs denies them their right to access services both inside and outside the criminal justice system."

Earlier this month, it was announced mental health nurses are to be based in police stations and courts in 10 areas of England as part of a pilot scheme aimed at cutting reoffending.

The nurses' duties will include helping officers to respond to calls and identify those with problems.

The £25m scheme - being trialled in areas including London and Merseyside - could be extended England-wide by 2017.