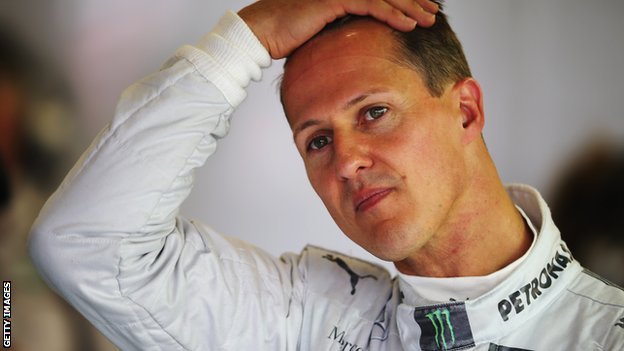 As doctors continue their efforts to bring Michael Schumacher out of his coma, it will be a stressful and frightening period for close relatives watching his recovery.

Michael Schumacher's wife Corinna has spent the past five weeks by the seven-time Formula 1 champion's bedside.

The public perception is that people just wake up and start their everyday activities after a couple of days. That's not the case”

Initially staying at a hotel close to Grenoble hospital, she is now understood to be making daily 100-mile (175km) journeys from the family's home near Gland in Switzerland.  She has been joined by other relatives including her husband's racing-driver brother Ralf Schumacher and the couple's children, Gina Marie, 16, and Mick, 14, who was skiing with his father when he fell and hit his head on a rock on 29 December 2013.

While some fans are already turning to social media to celebrate unconfirmed reports that Michael Schumacher has started blinking and responding to reflex tests, his family is under immense pressure as they observe the doctors trying to communicate with him.

"Waking from a coma is not like how it is portrayed in the movies," says Luke Griggs, spokesman for Headway, the UK's leading charity for people living with brain injuries.

"It can be a very gradual process that can take several days or weeks. For the family, the initial fear about whether or not the individual will survive is replaced by fear of what the future will hold and what level of recovery their loved one will make."

Patients usually start by opening their eyes, then responding to pain and finally by reacting to people talking to them.

It is a sequence of events that is a vivid recent memory for Mark Smith, a British paramedic whose 16-year-old son Ryan was in a medically induced coma after a cycling accident in July 2013. He remains in hospital where he is being treated for physical and mental health problems.

"Unfortunately the public perception is that people just wake up and start their everyday activities after a couple of days. That's not the case. It is very slow; there are no finite answers. You just have to stay hopeful that you will get interaction back one day."

Ryan said his first words just before Christmas and last Thursday he managed to update his Facebook status for the first time, using his tablet computer. He said simply, using a swear word, that he was feeling unwell. 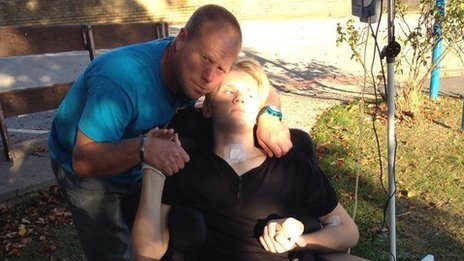 His father has asked the public to forgive his language and added "the fact that he can have feelings again is just quite immense, so we look past what he has written!"

Top Gear presenter Richard Hammond has spoken about his wife Mindy's bravery after a high-speed car crash left him in a coma in 2006.

Last month he told BBC Radio 5 live's Breakfast programme that Schumacher's accident had stirred terrible memories for her, whereas he has little recollection of his time in hospital.

"As far as my family is concerned, for my wife particularly, it was quite shocking to hear of it because she can empathise immediately with Michael's family," he said.

Writing in the Daily Mirror, he added: "My heart goes out to his family and everyone around him because they can't do anything but hope he gets better."

Doctors caring for Michael Schumacher at Grenoble University Hospital haven't commented on how he is responding to their latest tests and treatment.

At their last news conference in December, the head of the intensive care unit was clear that the helmet he was wearing had saved his life.

"Without a helmet, he wouldn't be here now," Prof Jean-Francois Payen told reporters.

According to research published in The Lancet, approximately a fifth of adults with a severe traumatic brain injury make a good recovery.

But many more die or are left with enduring disability.

A source close to Michael Schumacher has briefed journalists in Grenoble that his family is aware that things could change quickly "even for the worse".

Dr Peter Kirkpatrick, a leading British neurosurgeon based at Addenbrooke's hospital in Cambridge, says that it is "extremely unlikely" that Michael Schumacher will return to his previous level of health, although he insists it is "medically possible".

Michael Schumacher's multimillion dollar fortune gives his family the resources to buy in private healthcare for the star.

They are already being supported by Gerard Saillant, a trauma surgeon who operated on Schumacher when he broke his leg in a race crash in 1999. 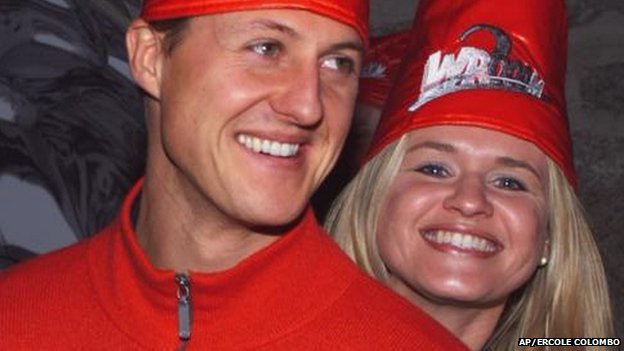 The charity Headway advises that the experience of a head injury tends to make strong marriages and relationships stronger and troubled relationships more troubled.  Corinna and Michael Schumacher have been married for almost twenty years and one thing the German media agree on is that they have a solid foundation.

The driver is reported to have told Germany's ZDF TV channel that they have never had a serious fight.  But head injuries can have an impact on even the strongest of spouses.

Olympic rower James Cracknell has written about how his marriage to broadcaster Beverley Turner changed after he sustained a head injury while cycling in 2010 and had to re-learn most physical tasks, including walking.

"To those around me, I was short-tempered, frustrated and angry," he said in his autobiography in 2012.

The effects of brain injury fall into three main categories:

"If you ask me if we have the same relationship we used to, then no, we don't. Will we? I hope so, although I genuinely don't know. I worry that Bev will always look at me in a slightly different way. She was summoned to a hospital in America to say goodbye because they didn't think I'd live. Then she was told I would but that I wouldn't know who she was at first and I wouldn't be the man she married."

He added: "For her, and for my family, I hope that I'm learning to adapt to the guy who is 'nearly James Cracknell'."

Luke Griggs of Headway says the road to recovery is unique for every patient.

"Put simply, the effects of brain injury can be devastating and last a lifetime. It can change every aspect of you: walking, talking, thinking and feeling. It can change personalities as well as capabilities.

However, we know that, with the right help at the right time, there can be life after brain injury."