Locked-in syndrome is a devastating condition in which a person can lose control over nearly all of their body, while their mental abilities are unaffected. One programmer, faced with this prospect, is using his skills to find a way to keep communicating even if the worst happens.

Watching Gal Sont sit at his desk, I doubt you'd immediately spot that something is different.

You would probably notice that he is into his tech, from the collection of monitors, cables and the projector anchored to the ceiling, and that he likes fantasy and sci-fi; every wall in the room is covered in a panoramic Lord of the Rings mural, and a model of the Star Trek Enterprise sits on a coffee table in the corner. This is Gal's man cave, and it is pretty well kitted out.

After that, you might wonder why the cursor on his screen is moving, despite the fact that Gal is almost completely still. In fact, only his eyes are moving.

A closer examination would reveal that on the screen there is a virtual representation of a keyboard, different letters and words are flashing up as the cursor moves, and programming code is appearing in the window below. 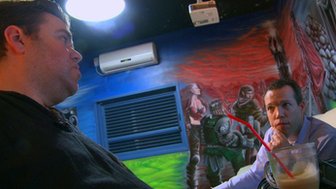 It's only when you hear Gal speak that you realise something isn't right.

"Your communication is the basis of everything, to tell someone you love them, to ask for something to drink, it is the basic need of every one of us: to communicate with my family and friends and tell them all that I need, in words. So communicating is very important, and if I can do it faster and more efficient, you know, I've won the world."

For Gal, talking slowly with a strained rasp, it feels as though he is fighting his body to say each word.

Gal is the co-founder of Click2Speak, and he is using his eyes to program the next version of software he hopes will allow him to keep communicating, even though, aged 38, he is gradually losing the ability to move and talk.

Diagnosed with the degenerative illness amyotrophic lateral sclerosis (ALS) in 2009, the neurons in Gal's brain and spinal cord responsible for voluntary movement are gradually dying.

As more neurons are destroyed, more and more muscle control is lost.

Gal faces the prospect of losing the ability to communicate meaningfully with his wife and two daughters, and being unable to program, something he has done nearly all his life.

ALS is the most common form of motor neurone disease. As it progresses, sufferers are usually left paralysed, often with control only over their eye movements. The causes of the disease are not fully understood, and there is no known cure. 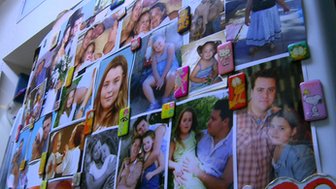 Born in Israel in 1976, Gal has been in love with computers since he was given a Commodore 64 when he was eight years old.

After marrying his school sweetheart, Gal studied maths and computer science at university and together with his best friend Dan Russ - also a co-founder of Click2Speak - he has worked in technology companies for more than 20 years.

"That's the first thing comes to mind when I think about the guy, a great friend, good guy, very smart, fun to work with, fun to have fun with. Gal likes adrenalin in any shape or form, whether it is kite surfing or roller coasters, Gal did it all. These days he gets his adrenalin rush from different sources."

Faced with the diagnosis of ALS, Gal's first reaction was to turn to computers to help solve some of his problems.

"When I was first diagnosed with ALS I decided to meet different people who understood what ALS held for me.

"I came to realise that these people first of all don't understand the potential, what technology can do for them, they use all kinds of different equipment which was very expensive, and as I know technology I didn't understand why they were so expensive.

"So I decided to build the best and fastest on-screen keyboard, then when combined with the camera, it gives you a very cheap and very good communication solution... accessible for all people, not only the rich."

Click2Speak is a start-up that is aiming to make a communication system for disabled people that is better and more affordable than anything that exists at the moment.

The software uses a special eye-tracking camera to watch your eye movements, this allows you to control the cursor on the screen. You click using a foot mouse, or by looking at a button for a few seconds.

"Dan and I go a long way back, and we both complement each other, in the way that I'm a very technical person - very software orientated - and Dan has the big view of business and talking and doing all the other stuff I'm less good at."

The Click2Speak software allows Gal to control any program on his computer - he can browse the web, send emails, chat in Skype, code, and even play video games.

But the key feature of Click2Speak is its integration with the SwiftKey smartphone app.

On your phone, SwiftKey helps speed up typing by suggesting words before you've typed them. It does this by analysing what you and others have typed in the past to learn and predict what you're most likely to type next.

Gal worked with the SwiftKey team to integrate their prediction engine into his software.

Another feature of the app, called "flow", lets you approximately drag your finger over the letters in a word, rather than pressing them each distinctly. In the Click2Speak software this means Gal doesn't have to click on each letter, he can simply glance at them with his eyes.

These features might save you a few minutes a day on your smartphone, but integrated into the Click2Speak keyboard, Gal he says he can communicate about 40% faster.

"You need to understand that for a disabled person who wants to click or to scroll down, or even to move the mouse, it takes a lot of effort and time, so every click you save and every feature you add, like auto scrolling and flow, is amazing. It gives the person an easier way to communicate."

Click2Speak isn't just about helping Gal communicate better, Gal and Dan want it to be available to help anyone in a similar position. 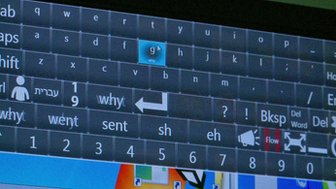 "I never asked for help from anyone my whole life, it was my wife and I against the world, but now I need help and assistance, and it's not too much fun to ask all the time for others to help you.

"So if you can buy a communication device by yourself without begging others to help, this is also very, very good. So I hope the people out there who hear about our software and the keyboard, will be able to use it, save money and time, and live their life."

Since March, Gal's ALS has progressed to the point where he now uses a wheelchair most of the time, and can only stand, supported, for brief moments.

As his condition worsens Click2Speak will increasingly become his main means of communication with his family and the world around him.

But even when that time comes, the software he created will still allow him to have a voice, to work on updates for other users, and to be able to do the thing he has loved since he was a child.

"I met many people, many sick people, not only ALS, but all kinds of people with different problems.

"What I came to realise is that life can be good if you let it."