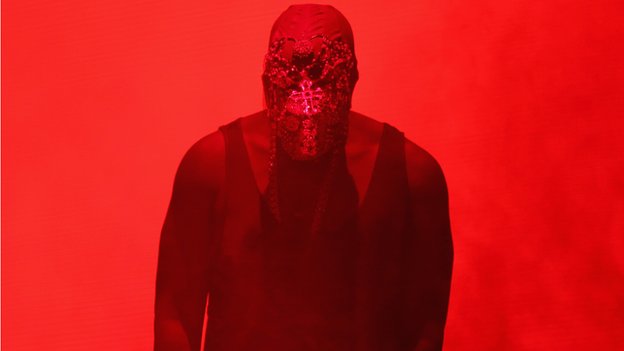 US rapper Kanye West hit the headlines this weekend after stopping a show in order to ask a disabled person in a wheelchair to "stand up". There have been arguments both attacking West's actions and defending his intention but is it ever OK to point out someone's difference in a crowd?

It was one of those moments that quickly sweeps the internet. Kanye West stopping his concert and repeatedly asking a wheelchair-user to stand up, and caught on YouTube.

"I decided I can't do this song, I can't do the rest of the show until everybody stands up," West told the Qantas Credit Union Arena in Sydney. "Unless you got a handicap pass and you get special parking," he added.

It turned out that some of his fans did qualify for a "handicap pass" and, rather than being passed over, they were brought to the attention of the entire arena who urged the disabled fans to "stand up, stand up" as prompted by the star.

Another fan who remained sitting was then pinpointed by West who complained: "This is the longest I've had to wait to do a song, it's unbelievable."

With the crowd booing, some closer to the fan tried to signal to West that the boy was in a wheelchair.

After apparently seeking further verification from a bouncer, West realised he had made a mistake. "If he's in a wheelchair, then it's fine," he said before launching into his next song.

To call out people for not standing up, when they are disabled and cannot stand up, in front of thousands of people, is humiliating”

Despite encountering much negative attention in the media over the weekend, according to the Courier Mail Kanye West has once again decided to ask for proof of disability from the fans in the crowd at his latest show in Brisbane.

"If you can not prove to me that you are in a wheelchair you need to be standing, if you can it is OK to sit down," he is reported as saying.

According to those in attendance West defended himself against the media furore in a five-minute rant saying: "I'm a married, Christian man with a family, pick another target."

West has been criticised about the incident in Sydney by local disability campaigners. "To call out people for not standing up, when they are disabled and cannot stand up, in front of thousands of people, is humiliating," says Craig Wallace, of People With Disability Australia, in the Herald Sun. "What if it was a young person who's coming to terms with their disability?" he adds, saying West should apologise and would also benefit from disability awareness training.

The situation proved comical for some, disabled and not. On Twitter, Australian comedian and prosthetic leg-wearer Adam Hills joked about the situation: "Dear Kanye, I ain't sayin you should know better, but she won't dance if she a no-legger," he quipped.

Some take the incident more seriously. Scott Jordan Harris, a disabled journalist writing for the Telegraph, believes disabled people shouldn't have to prove they're disabled and adds that they have the right to go out without being interrogated.

"Kanye West gave so little thought to disabled people that he was surprised to find two among an audience of thousands," writes Jordan Harris. "When he did, he felt it was his right as an able-bodied person to determine whether those people met his personal standard for disability. This attitude comes from the belief that public spaces belong to the able-bodied and that disabled people can only ever trespass in them."

With 11 million disabled people in the UK alone, disability comes in many shapes and forms. But the rapper referred specifically to wheelchair-users as those who might not be able to stand. 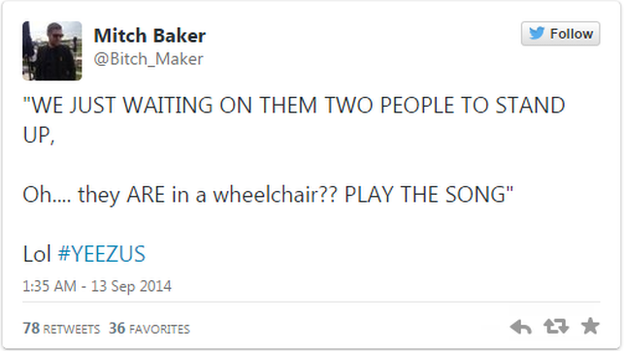 People at the Kanye West concert tweeted his comments

For Suzanne Bull, the CEO of a charity that improves deaf and disabled people's access to live music venues, it is important to teach others that not all disabled people are in wheelchairs.

"There are a range of facilities that disabled people need from a music venue," she says. "For example, non-wheelchair users find the viewing platform safer to be on in large crowds, visually impaired people need front row-seating, and provision needs to be made for assistance dogs."

Though widely reported as another of West's now famous gaffes, some believe his words have been misconstrued.

"Once he realised they were unable to he launched into The Good Life almost immediately," the Independent reported. And fans at the gig have defended him saying he exempted disabled people from his game from the start. They say he made it clear that if they were in a wheelchair they need not stand.

Jessica Kearney was in the arena at the time and says West's comments have been unfairly attacked. "There was no malice, if anything the audience (myself included) "booed" the person as no-one knew that person was in a wheelchair," she says. "Kanye asked and no-one replied, even though he repeatedly said, 'If you're in a wheelchair that's ok.'"

In the past, West has shown support for disabled fans. In June he asked his security team to give a wheelchair-user his microphone as a gift after spotting he had been blocked in and was unable to see the show properly.

Though stars often urge their audiences to get up and dance, disabled fans aren't often forced into proving their disability to those they admire. We're yet to hear how these particular fans felt about being singled out by the rapper.