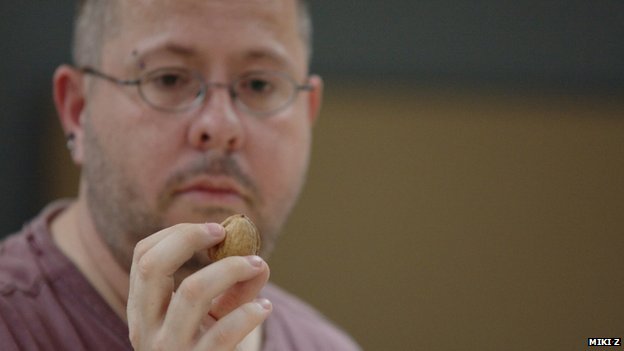 Sean Burn learnt to express himself through art while being treated for mental health problems. But, as he tours with a new play, he says that art which challenges audiences about disability is now discouraged.

In his work, artist and playwright Sean Burn likes to play with ideas around mental health in order to open up the subject. During one live art piece, He picks out nuts from a sack of walnuts and asks the audience: "Cracking up?" before breaking it open with his hands. "Then I offer the nut flesh to the audience," he says - and slowly a conversation opens up about mental ill health.

Burn says this approach allows him to "reclaim" the "ridiculous" phrases that people of mental ill health sometimes get called: "like nutter and nutcase".

"Nuts are very beautiful things," he says, "they feed you and they nurture you."

Burn has turned his hand to various art forms over the years, from poetry, to film-making, to drama. Some of his work features all three disciplines and his latest play is a monologue from a female psychiatric patient. Collector of Tears draws on his personal experiences of the mental health system. It features a sequence where the protagonist is under section, as Burn himself once was. "She has her ribs broken and they force-feed her an anti-psychotic drug," he explains.

I feel at home within the art world, I feel quite safe there but I also want to push boundaries and ask questions and so on”

The Newcastle-based artist has always written but he says that the catalyst for sharing his work was that enforced spell on a psychiatric ward 12 years ago, which he found very traumatic.

He spent seven months there and wasn't permitted to write when he wanted. When he was allowed, he says the results were immediately confiscated.

During his time there, Burn became fed up: "I thought 'I have a voice and I want it expressed, I'm not going to be polite any more and wait for my turn'," he explains. He says he craved equipment like charcoal or a camera with an inkjet printer so he could be creative.

Burn had been hospitalised many times before this occurrence, but has not been sectioned since. His mental health remains fragile and he describes himself as a service user. He feels safe, he says, when creating work and collaborating with artists.

"I can sit in a theatre in the dark and write and talk to actors but actually, having to go out the front door and deal with the public and the pace of life and buses and trains and shops and ordinary, normal, so-called 'every day life', that's when I start seeing things and hearing things and all that stuff sort of comes at you.

"I feel at home within the art world, I feel quite safe there but I also want to push boundaries and ask questions and so on." 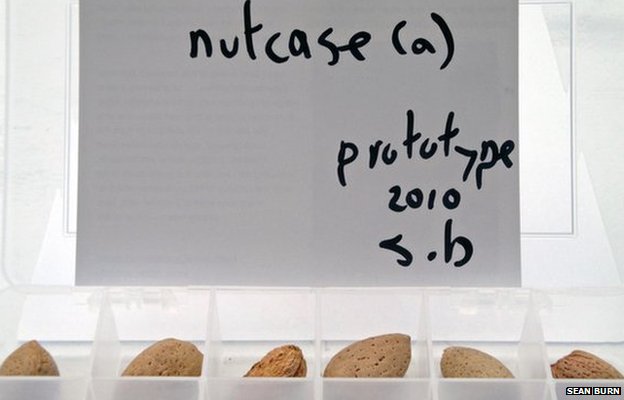 His latest play is a love story spanning four centuries. The main character, Tanya Sealt, is unable to cry and can't die until she does. She witnesses many historical events over her long life and collects the tears of those she meets along the way in glass bottles. On stage she opens each bottle before telling the story behind the tears inside. Release comes when she sheds her own tears of joy on 22 November 1990, on learning of the resignation of prime minister Margaret Thatcher.

"Tanya is there when they first bring televisions on to the ward, which she says jelly your brain," Burn says, explaining this is taken directly from his own experiences. "Watching television does my head in," he says. "All these scenarios start playing out and I don't know what's real and what isn't."

Two of his coping strategies are lying down in darkened rooms and wearing headphones, but he says that it's being an artist which has helped keep him stable.

Art by disabled people is sometimes thought of as being a therapeutic pursuit and so dismissed as lacking in merit. But Burn says that showing it to an audience and communicating things to them about mental health means it is more than just personal therapy. 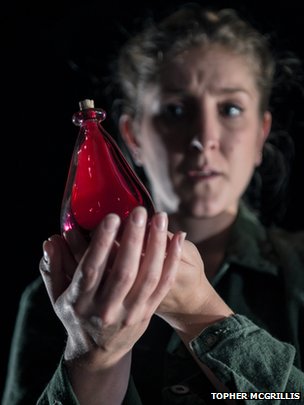 "There's that traditional model of a pyramid," says Burn. "At the top are the great artists and at the bottom is art as therapy." But he doesn't see art as a hierarchy, preferring to think of it as "bandwidth".

"It doesn't matter which strand you're occupying, it's completely legitimate," he says, urging that people should try and express themselves without trying to be a great artist.

Those close to the subject have long debated what they see as an important difference between "disability art" and "art by disabled people". Burn places his work firmly in the disability art category which he defines as "art by people with disabilities that talks about disability, or raises debate, or puts it in the public somehow". He considers disability art to be part of the mainstream, saying: "It belongs on the streets, in galleries, everywhere".

But he has noticed what he sees as a lack of commitment to the kind of disability art from those who have previously given funding to it.

"Over the last three or four years the Arts Council seem to be saying, don't be so 'bolshy' or don't raise your head above the parapet," he says.

He says there is now a lot of pressure on disabled artists to include non-disabled people. As a result, he says, some work is now "so inclusive that it's meaningless in a way".