The hearing aid chair fit for a king

A chair which doubles as a hearing aid is the centrepiece of a new exhibition, part of an international disability festival in the UK.

Thought to have been one of the first of its kind, an ornate chair from the 19th Century designed to amplify sound is part of a new collection on display in Liverpool.

The origins of the chair are unknown but it is an exact replica of one made for King John VI of the short-lived union known as the United Kingdom of Portugal, Brazil and the Algarve. He was hard of hearing, and, realising he needed a device to help him communicate better, he commissioned specialist craftsman Frederick Rein to make him an acoustic chair in 1819.

Rein was based in London and, in 1800, had set up what is believed to be the first firm producing ear trumpets, so was thought to be the most appropriate person to help.

As the chair had been commissioned for use by royalty, when Rein was making it he had to think about how to reflect the important status of the user in its design. Hollow arms were carved to represent the open mouths of regal-looking lions, which also acted as sound receivers a little like trumpets. The sound travelled to the back of the chair, where a tube, placed in the king's ear carried the sound to its final destination.

A modern day version of the same idea is used in the benches in the House of Commons which have loudspeakers inserted in the head rests so MPs can follow discussions more easily.

The king is thought to have used his acoustic chair when holding audiences with noblemen and commoners during his time living in Brazil. This custom was called 'beijo-mao' and made the king very popular, so it was important that he could hear and respond to the concerns of his people.

The tube was placed in the user's ear

It is believed that King John used the chair to aid his hearing until his death in 1826 whilst ruling from Brazil.

Going forward, acoustic chairs became more popular, but didn't really make it into the mainstream. By 1836 John Curtis was writing in his book Treatise on the physiology and pathology of the Ear: "The acoustic chair is intended for the benefit and use of the incurable deaf ... By means of sufficient tubes, this chair might be made to convey intelligence from St. James's to the Houses of Lords and Commons, and even from London to the King at Windsor," and so was perhaps imagining what would later become the telephone.

What else can you see at the exhibition?

Exploring how people negotiate everyday activities differently, the Art of the Lived exhibition is part of the biennial Dadafest in Liverpool, celebrating deaf and disabled art.

It features sculpture, film, installation, painting, prints and performance work and asks questions such as: how can people negotiate everyday activities?

This year's collection builds on themes from the last international DaDaFest exhibition in 2012, Niet Normaal, which questioned what 'normality' is.

Here are a selection of some of the other works from the exhibition.

For this exhibition, artist Tony Heaton has taken an Invacar - a small car issued to disabled people in the 60s and 70s by government - and has transformed its image and status.

The Invacar was a cheap mode of transport that was a response to the lack of access for disabled people to public transport. With an unlined fiberglass shell and a single seat, the vehicle had only three wheels and space for a folding wheelchair. It was just 9'9" long and 4' 6" wide. 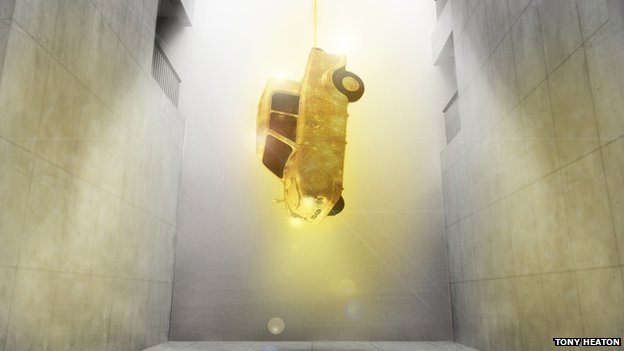 The single seat meant you had to travel alone. Heaton says that for many disabled people at the time, its design insinuated that "you had no friends, family, lovers. the solitary cripple." It was painted with a pale blue which the artist says became known as "spazz blue".

The lightweight slow speed vehicle was banned from motorways, on which could be seen signs that read "No Invalid Carriages". The Invacars were eventually banned from Britain's roads in 2003 due to safety concerns, and like all icons-of-old can now only be seen in museums.

Heaton has transformed one Invacar from "spazz blue" to gold for this exhibition, turning an object of ridicule and little value into something of value.

Katherine Araniello's video is a new commission for DaDaFest International. It follows her as she negotiates the cobbled streets of Liverpool's Albert Dock in her wheelchair for a distance of 80 metres. While the distance takes an average walker 1 to 2 minutes, the same journey took her 22 minutes. She says that the video presents a display of exploration and self-dependence. "No assistance is offered from passers-by, and no assistance is expected," she explains.

James Leadbitter, who works under the pseudonym of The Vacuum Cleaner has reworked his film 'Ship of Fools' for the exhibition.

The film follows Leadbitter as he turns his flat into a mental health facility and detains himself for 28 days. After being told by his doctor that he needed inpatient care in an acute ward, Leadbitter was determined not to have the same negative experience he had had in the past so instead he wrote his own mental health act and over the next four weeks invited artists to come and spend time with him in an "attempt to find creativity in madness." The resulting film tells the story of what happened, and how it worked.

Art of the Lived Experiment is running until 11 January 2015 at the Bluecoat in Liverpool as part of DaDaFest.