Rejections for disabled parking badge applications have leapt up since tougher measures were introduced.

The Welsh government brought in new regulations to prevent fraudsters abusing the system in 2013.

Councils were told not to just rely on evidence from GPs and there are now concerns that people with genuine disabilities are being refused a badge.

BBC Wales has found that in some areas the number of rejections has more than tripled inside three years.

The Welsh government is looking into complaints from disabled drivers amid fears many elderly or deserving people could be missing out. 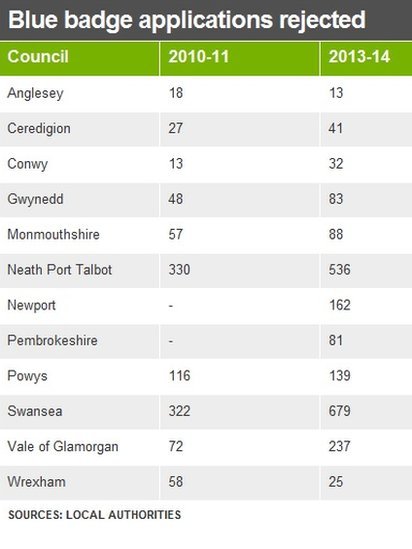 Blue badges are issued to people with mobility problems or disabilities and allow the driver to park on double yellow lines or in specialist bays closer to their destination.

Normandy veteran Neil McLeish, who landed on Sword beach with the Welsh Guards in 1944, had his application to renew his blue badge rejected by Neath Port Talbot council.

The 92-year-old angina sufferer from Ystalyfera had held the badge for 10 years but said he was told he had been unable to provide independent evidence to show he had significant difficulty walking.

He said: "Since they took the badge away I don't really go out much in the car because I'm afraid I won't get a parking place. I've just given up."

A Neath Port Talbot council spokesman said: "Welsh government recommends that assessment of eligibility for a blue badge under the discretionary criteria requires the applicant to provide supporting evidence of their mobility-related difficulties from an independent medical practitioner but this does not include their GP."

The Vale of Glamorgan council area has seen the largest increase - from 72 up to 237. 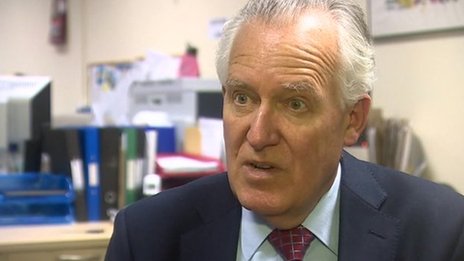 Neath MP Peter Hain said: "I'm horrified to learn that rejections are up to almost two thirds greater than they used to be, but it reflects my experience.

"I've never had so many complaints from people who are genuinely disabled."

A Welsh government spokesman said: "We introduced new regulations to ensure fairness and consistency in awarding of the badges, but several issues have been brought to our attention which we are now looking into."