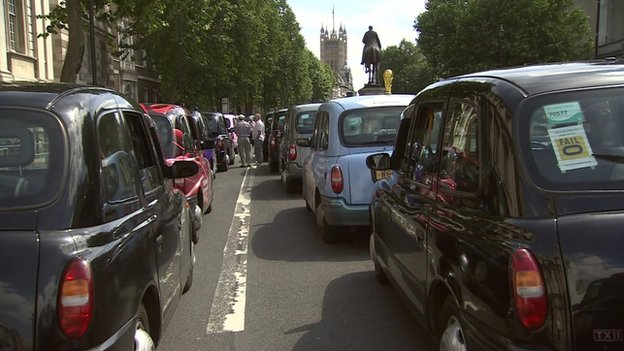 There are 25,546 licensed taxi drivers and 70,928 private hire drivers in London

London's transport body has been criticised for being "woefully inadequate" when it comes to regulating the taxi and private hire industry.

A cross-party London Assembly report found fewer than half of passengers knew if a vehicle was licensed and 74% of rank spaces were north of the river.

It set out 19 recommendations for Transport for London (TfL) to consider including using signs to indicate licensed vehicles.

The committee used the answers from 1,000 passengers and 200 drivers to consider the industry which sees more than 25,000 taxi drivers utilising the "rank and hail" market and almost 71,000 private hire drivers offering pre-booked services.

I can't remember such a critical report from the transport committee. It is brutal.

It calls Transport for London "not fit for purpose", "woefully inadequate" and calls for it to "get a grips with the basics".

There aren't enough ranks, enforcement of touting is "outstandingly low" and industrial relations are rock bottom.

Most cabbies and private hire operators will feel vindicated with the findings.

The question is what are Transport for London going to do about it?

It found that touting was the "single biggest...issue" with enforcement numbers "outstandingly low" and fewer than half of passengers were able to recognise a licensed vehicle.

While 58% of those questioned said the presence of a TfL licensing sticker was reassuring, trade representatives said there was concern about counterfeit stickers.

The report also criticised TfL over the "recent furore concerning Uber", a mobile phone app, which "raised serious questions...about TfL's fitness as a regulator" and which many drivers feel is a company left un-regulated.

It said trade groups had major concerns with the perception that TfL had failed to present a robust challenge to Uber as it tried to change legislation to "suit its own business interests" and may have "opened the floodgates" for future challenges.

Caroline Pidgeon, chairwoman of the transport committee, said: "The interest in and focus on the arrival of Uber in London has become a distraction from some very serious issues facing the taxi and private hire industries.

Four of the 19 report recommendations

"TfL's performance as regulator and enforcer has been woefully inadequate and the interests of the passenger are being largely ignored."

Concern was also raised about the provision for disabled people who found taxis did not always stop when hailed and some drivers refused to carry assistance dogs.

Mayor of London Boris Johnson said: "The black taxis are one of the glories of the London transport system...and they deserve to be properly regulated."

Garrett Emmerson, TfL's chief operating officer for Surface Transport, added: "London's taxi and private hire services are the envy of the world and, under Transport for London's oversight, are thriving.

"The number of trips are up, customer satisfaction rates are high and, due to our stringent licensing processes and enforcement work with the police, journeys in taxi and private hire vehicles have never been safer.

"We will, of course, carefully consider the Assembly's recommendations. "

But Steve McNamara, from the Licensed Taxi Drivers' Association, suggested more needed to be done.

"Londoner's are being let down badly. This report just about gets that right. We think we need a parliamentary inquiry."