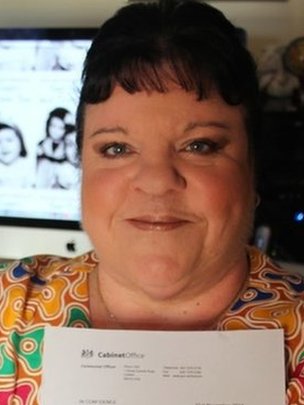 Rosaleen Moriarty-Simmonds said her OBE was a shock

A woman who was born without limbs has become an OBE in the New Year Honours list for her campaigning work.

Rosaleen Moriarty-Simmonds from Cardiff has been recognised for services to the equality and rights of disabled people.

Her mother was given Thalidomide to take during her pregnancy, resulting in her disability.

She said: "There's still a long way to go for equality and I hope this will help my fight for the rights of disabled people."

Ms Moriarty-Simmonds was the first disabled person to gain a degree at Cardiff University and went on to be an artist, writer, TV and radio broadcaster and campaigner.

"When I was 10, the law changed which meant that disabled people then had a right to education. That was a huge step," she said.

"Since then there's been more accessible buildings and better attitudes and there's been legislation to back what the average person on the street doesn't give much thought to - we have made great changes."

The head of the Royal College of Nursing in Wales, Tina Donnelly from Pontypridd, has been appointed CBE for services to nursing, the armed forces and trade unionism.

Jenny Broughton becomes an MBE for services to sexual equality and families for her work campaigning for gay and lesbian people.

David Robert Gerrard was appointed MBE for services to the Scout movement and young people in Cardiff.