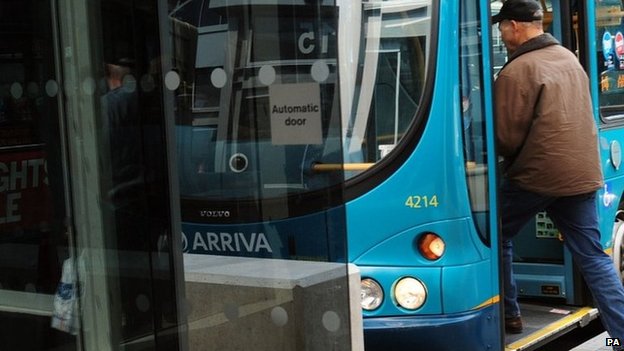 Budget cuts by councils have left bus services facing a crisis, a report by the Campaign for Better Transport says.

The group says half the councils in England and Wales have cut funding for buses in 2014/15, amounting to more than £9m when compared with 2013/14.

The CBT said its figures came from Freedom of Information Act requests.

A Department for Transport spokesman said decisions about buses were best made locally but the government provided "substantial funding".

The CBT said local authority funding for bus services had been slashed by 15% since 2010, or £44m, with more than 2,000 routes being reduced or withdrawn entirely.

Its report also says that:

"Across the country, bus services are being lost at an alarming rate.

"Year-on-year cuts to budgets mean entire networks have now disappeared, leaving many communities with little public transport and in some cases none at all.

"It's very worrying that further steep cuts in budgets are threatened next year and beyond. The government must introduce new initiatives which recognise the vital social, economic and environmental role buses play."

Mick Cash, general secretary of the RMT transport union, said: "This shocking new report lifts the lid on the trail of misery left strewn across the country as multimillion-pound cuts to bus services condemn hundreds of thousands of people to lives of isolation and imprisonment in their own homes.

"The poisonous cocktail of cuts and privatisation reinforces our call for bus services to be taken back into public ownership with the resources required to run as a comprehensive public service."

The DfT spokesman said that it regarded bus services as "vital", especially for many older and disabled people.

"That is why the government provides substantial funding, protected until 2015/16, to bus operators to help more services run and keep ticket prices down.

"A further £1bn a year is provided for the free national bus pass.

"Decisions about bus services are best made locally in partnership between councils and the companies which run the buses."