HomeNewsWhy I get mistaken for being drunk 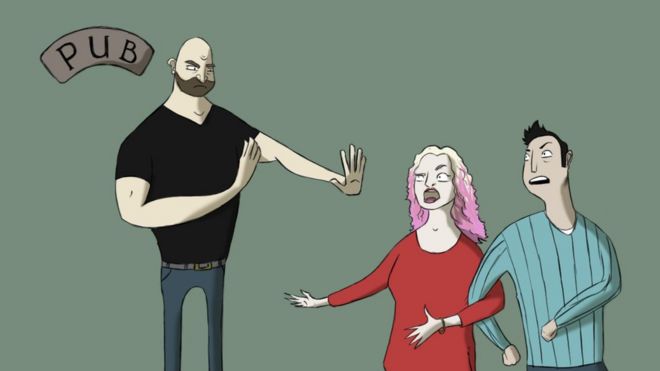 Sex and relationships for disabled people can give rise to unspoken questions and sensitivities - often among the able bodied. But amid the awkwardness there is humour. The following is an edited version of a monologue by Ruby MacKellar, who has dyspraxia.

Everybody had already taken all the good disabilities, so I got left with dyspraxia. Somebody had to have it.

It's a developmental, co-ordination disorder - the less sexy cousin of dyslexia. It largely affects motor control and speech, and memory and information processing, so what generally happens is I fall over a lot and I cock everything up.

Little things are difficult for me, like clothes, hair and make-up, so I like wearing large, elasticated clothes that don't show I've dropped my dinner down them. I've no excuse for my hair, obviously.

I love living alone because of people. And so my favourite activity is sitting alone on the sofa in my pants, watching telly.

I can't actually keep pets or houseplants alive, so I certainly can't keep love and affection alive - that's far too much commitment.

I do have some needs though, so to that end I went online and did a bit of online dating. Online dates, generally, can work in your favour because people are invested in them and they want to be there. They're trapped, which is good news for me.

Often with dyspraxia, I come over very loud and sweary initially, and if I don't know people I get a bit overpowering and overwhelming.

This is apparently a classic dyspraxia symptom and I hadn't realised. I used to think I was this fascinating person with all these quirks and I've discovered I'm nothing but a list of symptoms. I was gutted when I realised this, but don't tell anyone, obviously.

Watch all the stories from the Ouch Storytelling event

So my date's looking a bit nervous and I thought, we'll go to the nearest pub. I'm going along as I usually do, tripping over, talking loudly, waving my arms around, hitting lampposts and then we try to get into the pub and the bouncer says, "No, you're not coming in." I said, "What?"

This is in the afternoon, and the guy says, "No, you're obviously too drunk, you can't come in."

I do get this a lot, so I thought I'd argue with him because, as we all know, arguing with a bouncer, you're never going to lose that argument.

This was not going well, as you might imagine. And, not being gracious in defeat, I was just swearing and stomping off, having a go at him under my breath and generally vindicating him that I shouldn't be allowed in.

The grim determination to have a good time.

We're going along and I was thinking I was looking quite good in my heels. I can't walk in high heels, I can barely stand in high heels but this doesn't stop me.

They're fairly orthopaedic-looking, flat ones, but it still counts and I imagine it makes me look like a girl, a delicate little flower all sanguine and sexy. Not like the angry tractor that I usually look like.

Inevitably, I fall. And I don't fall in the way I would fall in my head [delicately]. No, I come along and I stack it on the pavement. Face on the pavement, limbs flailing, collateral damage, people screaming, swearing loudly. It was a terrible mess.

My top tip for this is: don't style it out, just stay on the ground. Otherwise everyone mocks you and people stand around filming it for YouTube, thinking it's hilarious.

You stay down and they start to worry and think, hang on, it might actually be serious and, how bad will I look if I'm laughing? So you wait for assistance and someone always comes over and helps you up.

The date picks me up off the ground. I'm galled that he didn't prevent it from happening in the first place - I'm already resentful. But fortunately this has taken place outside a pub. I go in and the landlady sees me bleeding everywhere and she comes over with a roll of toilet paper, trying to stem the bleeding and save the furniture.

I wasn't too badly hurt because I'm so scarred my knees are nothing but scar tissue from years of falling over. I'm slowly building an exoskeleton of scar tissue and stitches, so you can't actually hurt me at all, like Terminator.

We send someone off for TCP and I'm sitting there in the pub with blood, tissues, pouring this [TCP] over my leg because that adds ambience to a sexy date I find. The smell of TCP everywhere - who doesn't love that?

By now, I'm drinking and within seconds I'm crying, saying: "Why is everything so difficult? Why is this happening to me?"

At this point, I remember you're meant to chat, do small talk, which I can't do. I don't understand it. So I'd written little cues up my arm and tried to pass it off as a tribal tattoo. So I'm chatting away - "What do you do? Where do you live?"

It was every bit as scintillating as you might imagine. We decided to leave, and we left of our own volition, which is always a win - not being asked to leave.

I get back home and just try and forget all about it, watch cartoons, sit on the sofa in my pants - equilibrium is restored. I'm much happier again. I'm pretty much accepting that I'm going to die penniless and alone and I'm well on course for that. Achievable goals.

But then a few days later I hear from the date. He texts me, wants to see me again! Why? Why would you put yourself through that? What sort of person would want to experience all that again, what sort of self-esteem problems do you have?

It's absolutely ridiculous. I think, God, I don't want to know anyone that wants to go out with me again, what a loser! And that'll be one of the many, many reasons I've been single for 10 years.

Thank you for laughing at my misfortune, I'm very glad that you did!