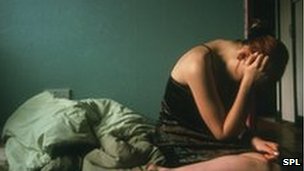 Some patients are not being involved in decisions about their treatment, the report says.

Some mental health services have "allowed cultures to develop where control and containment are prioritised over care", a report says.

The health regulator for England, the Care Quality Commission (CQC), interviewed 4,569 patients who were subject to the Mental Health Act.

The commission found some hospitals were failing to involve patients in decisions about their treatment.

The Department of Health says the report confirms "institution bias".

The Mental Health Act allows health professionals to treat people in the community and detain people in hospital without their consent.

The regulator visited 1,546 wards where people were detained under the act and examined the treatment of people given community care subject to the act.

The report shows that while there is welcome progress, many challenges remain”

The report says during one hospital visit none of the patients interviewed felt involved in plans about their care or treatment.

And some patients were unaware of what they needed to do for their discharge to be considered.

The CQC says: "It has proved all to easy for cultures to develop in which blanket rules deny people their basic rights - especially the right to dignity."

And the regulator found the number of people subject to the act was rising, with 48,600 people receiving care under the act last year, a 5% increase compared to the period 2010-2011.

Mental health services also suffer from a shortage in specialists approved to carry out the assessments which ensure the act is used appropriately, the CQC says.

And during one in 16 visits by the CQC, hospitals had more patients than beds.

In a joint statement, the charities Mencap and the Challenging Behaviour Foundation said: "We are concerned that in many hospitals, abusive practices, such as patients being over-restrained, locked up and overmedicated are being allowed to continue.

"People's needs are simply not being understood and people with a learning disability are particularly vulnerable because they often can't speak up for themselves."

A Department of Health spokesperson said: "This government has made it clear we expect the NHS to put the importance of treating mental health problems on a par with physical health.

"This report confirms what we knew about institution bias, that is why we support CQC's moves to strengthen regulation and monitoring of mental health services."

Prof Sue Bailey, president of the Royal College of Psychiatrists, said: "The report shows that while there is welcome progress, many challenges remain, particularly with the current pressures on acute psychiatric services to respond to those with severe mental illness.

"Worrying trends such as increased rate of detentions may have many causes, but are something that should concern all of us."