Government warned over 'them and us' online services 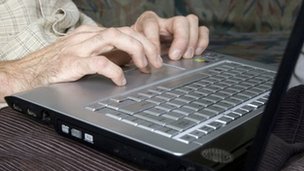 The government says it wants to make its services "digital by default".

The government is in danger of creating a "them and us" situation by digitising public services, a report warns.

Ministers say 82% of "transactions" can be carried out online, as that is roughly the proportion of the population which uses the internet.

But the National Audit Office argued that the percentage of people able to access some services, such as those used by elderly people, was lower.

It called for "continued access" to face-to-face and telephone services.

The government said it was continuing to offer help to users and promised to create websites "so good (that) people will prefer to use them".

The coalition has moved most government services to the single gov.uk address, after Whitehall departments set up their own sites in a more piecemeal fashion. Other bodies are expected to follow by March next year.

It estimates that making services "digital by default" may save up to £1.2bn during the current parliament, with future savings potentially reaching £1.8bn a year in the longer term.

A study has put the average cost of face-to-face transactions at £8.62 each, those via telephone at £2.83 and those via a website at 15 pence.

In its report, the National Audit Office (NAO) agreed there was "greater scope" for online public services.

It said: "The government, in calculating potential savings, has assumed that 82% of transactions with public services will be carried out online, the proportion of the population currently online."

But it warned that "online use of some services falls short of that level", and that "age, socio-economic group and disability do make a difference".

The NAO looked at 20 public services and found the main reasons for lower take-up were: a preference for face-to-face dealings; an unwillingness to provide information online; and low awareness of some online services.

The report said: "The government has set out plans to help people not on the internet to use digital services. Given the scale of 'digital exclusion', the government now needs to put these plans into action to avoid a 'them and us' problem."

Amyas Morse, head of the NAO, said: "Online working is increasingly central to the delivery of government services and rightly so. But it is important to remember that there are significant numbers for whom this does not work - who cannot or do not want to go online."

"Putting these services online, rather than using face-to-face, postal or phone options, will deliver substantial savings to the public purse, and save users time and money.

"We are developing digital services that are so good people will prefer to use them, while ensuring that those who are not able to go online are given the support they need to do so."