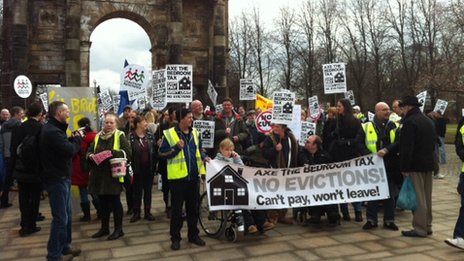 Thousands of people across the UK have taken part in demonstrations against changes to the benefits system which they describe as a "bedroom tax".

One of the largest marches was in Glasgow, with about 2,500 people.

About 1,000 people demonstrated outside Downing Street, with a similar number marching past the Scottish parliament.

Work and Pensions Secretary Iain Duncan Smith has said the current system of benefits had to be reformed because it was "unfair".

The changes will limit welfare payments to households deemed to have more rooms than they require.

Those campaigning against the UK government policy have claimed that it is effectively a tax on these households. 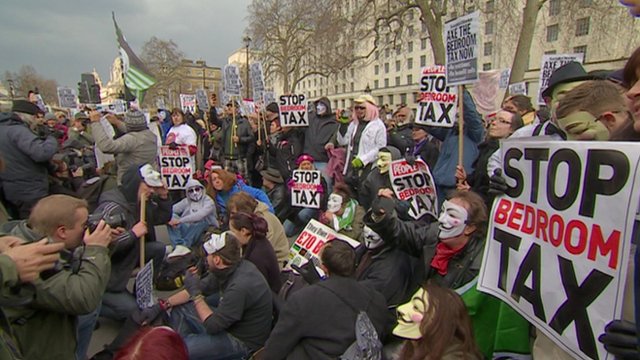 About 1,000 people demonstrated outside Downing Street

He added: "It is a disgrace that this government chose to attack disabled people."

Disability rights activist Susan Archibald, taking part in the Edinburgh demonstration, said: "We have heard talk about 'strivers and skivers'.

"One person can be a striver one day and then get made redundant. Will they be a skiver the next day? That's how easy it happens."

Mr Duncan Smith defended the reforms during a visit to Edinburgh on Wednesday.