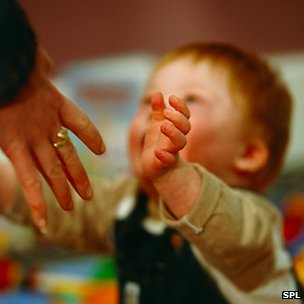 Down's syndrome is the most frequent single cause of birth defects

Brain cells have been grown from skin cells of adults with Down's syndrome in research that could shed new light on the condition.

US scientists found a reduction in connections among the brain cells and possible faults in genes that protect the body from ageing.

The research in the Proceedings of the National Academy of Sciences gives an insight into early brain development.

Down's syndrome results from an extra copy of one chromosome.

This generally causes some level of learning disability and a range of distinctive physical features.

A team led by Anita Bhattacharyya, a neuroscientist at the Waisman Center at the University of Wisconsin-Madison, grew brain cells from skin cells of two individuals with Down's syndrome.

This involved reprogramming skin cells to transform them into a type of stem cell that could be turned into any cell in the body.

Brain cells were then grown in the lab, providing a way to look at early brain development in Down's syndrome.

One significant finding was a reduction in connections among the neurons, said Dr Bhattacharyya.

"They communicate less, are quieter. This is new, but it fits with what little we know about the Down syndrome brain.

It seems to be another step forward, giving us insight into the effects of having three copies of chromosome 21”

Brain cells communicate through connections known as synapses. The brain cells in Down's syndrome individuals had only about 60% of the usual number of synapses and synaptic activity.

"This is enough to make a difference," added Dr Bhattacharyya. "Even if they recovered these synapses later on, you have missed this critical window of time during early development."

The researchers looked at genes that were affected in the stem cells and neurons from two individuals with Down's syndrome.

They found that genes on the extra chromosome, chromosome 21, were increased greatly, particularly genes that responded to damage from free radicals, which may play a role in ageing.

This could explain why people with Down's syndrome appear to age quickly, although this remains to be tested, said the University of Wisconsin-Madison team.

Commenting on the study, Carol Boys, chief executive of the UK Down's Syndrome Association, said it was interesting work from an established, well-known team.

"It seems to be another step forward, giving us insight into the effects of having three copies of chromosome 21," she said.

"We are learning more all the time about the mechanisms that cause certain aspects of the condition Down's syndrome and this may ultimately result in the development of therapies for treatment."