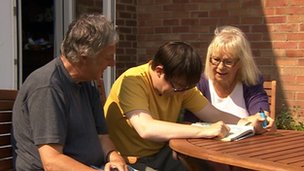 The family of a brain-damaged 30-year-old man claim his lifelong condition was caused by the negligence of the hospital he was born in.

They claim he contracted an infection in the Special Care Baby Unit of John Radcliffe Hospital in 1983, which led to his lifelong severe disability.

The trust denies liability and says it will contest any claim.

His parents, Dushka and David, from Headington, have decided to take legal action because they are concerned about how their son will be cared for after their deaths.

Mrs Kirtland said: "As we've got older we've lost our parents and you realise that love isn't enough to care for someone.

"As we go Paul will have nothing."

Their solicitor, Sue Jarvis, said: "Paul's medical records, which we have obtained copies of, show that when he was admitted to John Radcliffe's Special Care Baby Unit he contracted an infection called klebsiella oxytoca.

"He was 10 days old before he was given treatment appropriate to him in order to tackle it.

"Our medical experts believe the long time it took him to recover from that infection was caused by the delay in administering treatment."

Oxford University Hospitals NHS Trust believe Mr Kirtland's long-term problems are a consequence of other illnesses he was admitted to hospital for at the time, which were unrelated to the infection.

Medical director, professor Edward Baker, said: "The trust will contest any legal claim brought against it in this case.

"It does not believe Mr Kirtland's brain damage was caused by the klebsiella oxytoca infection he had whilst a patient at the Special Care Baby Unit."

The NHS Trust claimed that, in the 10 months prior to Mr Kirtland's admission, the unit had five cases of the infection, out of approximately 350 admissions.

It stated the infection was "not unusual for babies" and the numbers did not show "an increased risk of cross-infection".

Klebsiella oxytoca is a bacterium which can be common in hospital admissions and be transferred between patients.