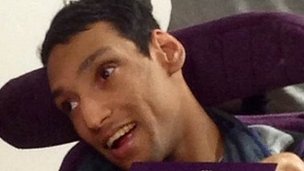 A mother who has been fighting for justice for nearly three decades after her son was born disabled following errors by hospital staff, says she is still haunted by the whole episode.

Ronak Patel, who has severe cerebral palsy, suffered brain damage after Northwick Park Hospital in Harrow, north-west London, failed to spot his mother Smita's appendicitis during her pregnancy in 1982.

Earlier this month, nearly 30 years on, Mrs Patel, a retired civil servant from Pinner, has finally been awarded £7m in compensation to provide for his care.

"I noticed a few months after he was born he wouldn't smile like other children - he would only respond when I spoke to him," she said.

"I had difficulty feeding him, so I decided to take him to my local GP who noticed something was wrong."

He is like an overgrown baby, you have to feed him, wash him, even give him a drink and you have to guess when he's thirsty.”

She and husband Jitendra Patel took legal action when Ronak was aged about four, but seven years later they were told no negligence had been found.

The family decided that that was the end of the matter and their son continued to go to a special school, coming home at weekends and school holidays.

Ronak, who is unable to use his arms or legs, talk or sit upright unaided, was moved to a care home in 2005.

Mrs Patel said: "He is like an overgrown baby, you have to feed him, wash him, even give him a drink and you have to guess when he's thirsty."

It wasn't until 2006 that the couple were persuaded to take court action once more.

After a lengthy court battle the hospital's insurers agreed an out of court settlement with the family's solicitor, Sue Jarvis from Blake Lapthorn.

North West London Hospital NHS Trust, which looks after Northwick Park Hospital, agreed a figure of £7m to be held in trust for Ronak's care.

But for Mrs Patel the victory was tinged with sadness as her husband had died in 2008.

"I lost my husband in 2008 and sometimes I think it was down to worries over Ronak.

"I myself have also had health problems and suffered a heart attack."

Ronak is currently being cared for at a private home but the money will help him return home early next year.

In a statement, chief executive of North West London Hospital NHS Trust, David McVittie, said: "I am pleased that the court has approved an agreement between the parties that resolves this claim.

"This agreement will ensure that Ronak has the assistance he needs throughout his life."