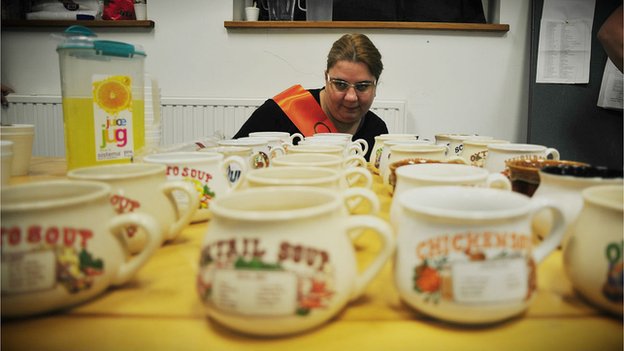 Colchester is a relatively affluent UK town. So why is it borrowing a micro-funding idea from a US city that went bankrupt?

Soup is rarely thought of as particularly inspiring. But that's the case for a fledgling few in the small Essex town - Detroit Soup to be precise.

It's a socially-focused crowdfunding project, in which members of the community pay a small entry fee in return for a bowl of soup - and the right to vote on one of a few local causes pitching to win the prize fund, which is the sum of the entry money.

At this Colchester event, the voters decided to buy a new kiln for a daycare centre for disabled people using the £191.52 prize fund (the combined £5 entry fees plus someone's £1.52 donation) from the second ever Colchestersoup. 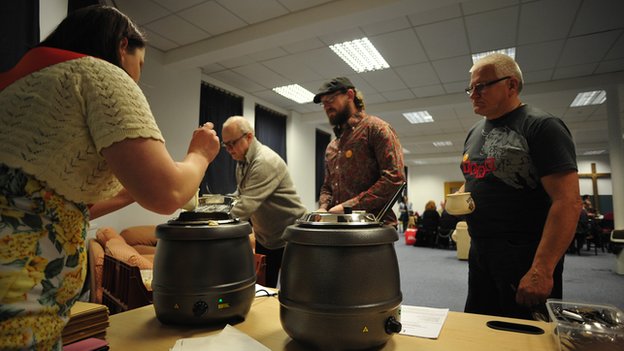 The projects pitching for the fund were small in scale and local in nature. 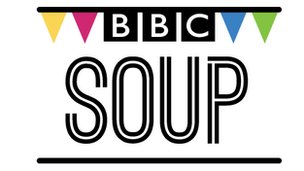 To find out more about soup projects visit www.bbc.co.uk/soup.

Feeling inspired yourself? Check out our How to Soup guide.

The Essex Feminist Collective pitched for money to work with young people about equality, while Essex Raynet was asking for help towards its £2,000 plan to put an aerial on top of the town's football stadium.

Some might question whether such projects are big enough to make a difference. Or whether they should really be funded by councils or other grant-making bodies.

Taylor admits that these pitches may not be the biggest or sexiest of causes, and most would be too small to warrant a lengthy grant application.

But that does not mean they cannot make a difference, she says. 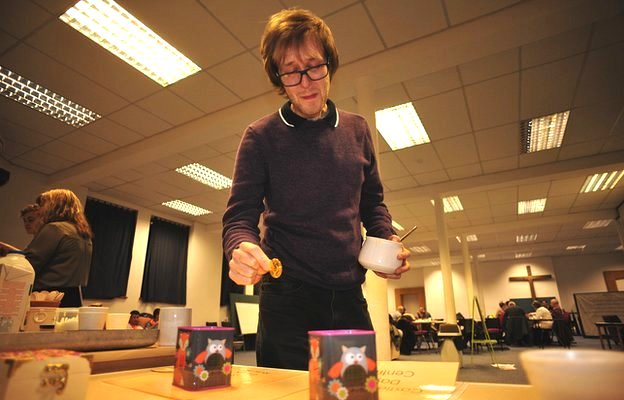 Decisions, decisions: a Colchestersoup attendee decides which cause will earn his gold voting coin

And there was something about the Castle Gate Day Centre's bid for a new kiln which won hearts on the night.

The current (rusted and decrepit) kiln, according to the charity's Sandy French, was used by disabled people at the day centre to learn pottery. But it also plays a far wider role in breaking down boundaries. 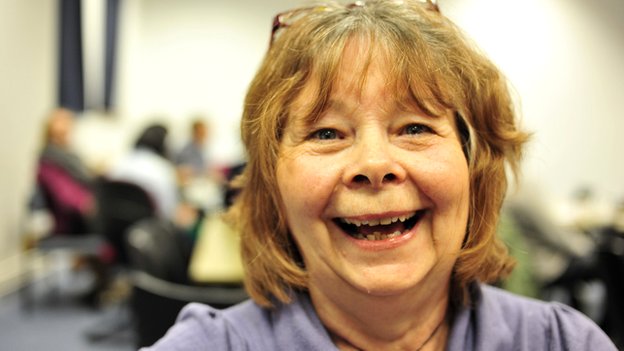 "There are just so many activities that are really therapeutic and which you and I take for granted," French says during her pitch.

"But by the time they leave," she continues, "their attitude towards people with learning or physical difficulties has completely changed."

And a tiny part of the world has just been changed for the better, says Colchestersoup founder Karen Taylor.

With a background in finance and insurance, Taylor may seem an unusual champion of the small-scale community project.

"It started because I read about Detroit and I loved the idea. I sat back to see if anybody else would do it. They didn't." 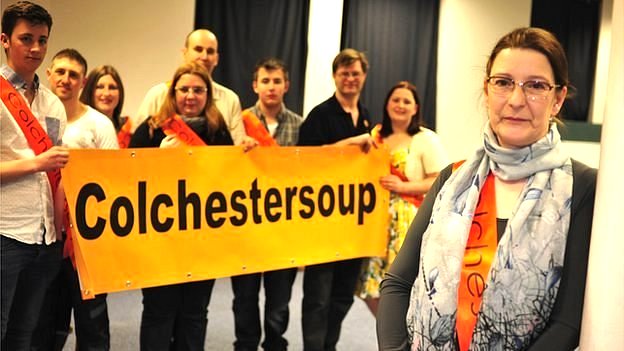 Then she went along to the Southend Soup and was hooked on the idea.

"It totally got me," says Taylor, now a practice manager for a firm of architects. "This was just something that felt right. If it goes wrong, well hey, it is two hours lost. If it goes well, then hey, who knows? I thought 'just do it', so I did." 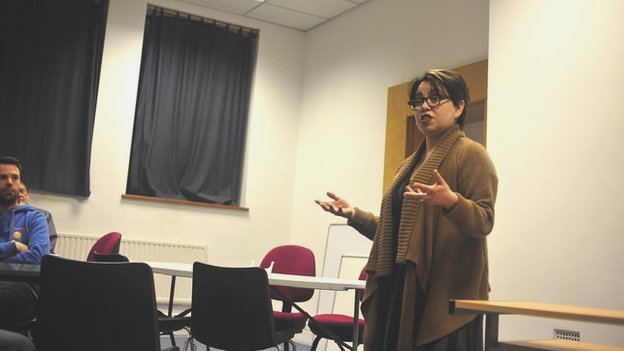 Elisa Vasquez-Walters, of the Essex Feminist Collective, delivers her pitch

The rules of Colchestersoup are simple. You cannot use electrical devices for presentations, you cannot tell anyone you'll be pitching, and you must finish your presentation within five minutes or else be silenced by a small brass bell.

"We don't want people to know who is pitching before they get here," explains Taylor.

One of the peculiar things about Colchestersoup is that taking part genuinely seems to matter more to the participants than taking home the winnings.

"They just want people to know who they are and what they are doing more than the money," says Taylor. 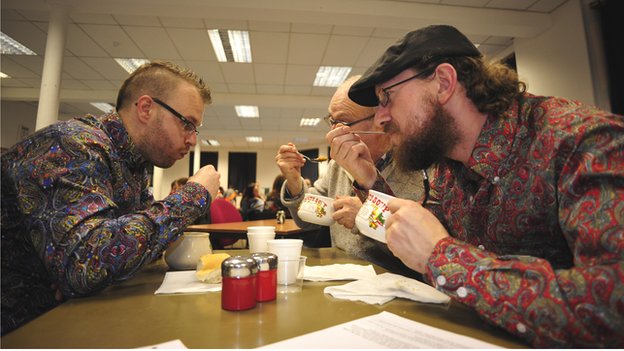 "It is all about the conversation," agrees Elisa Vasquez-Walters of the Essex Feminist Collective.

"In the age of technology, everything seems so insular. Yet life is all about the community, the people and having that conversation."

So busy was Mike Taylor telling his audience about the work of Essex Raynet that he almost forgot to say what they wanted the prize money for before his time was up. 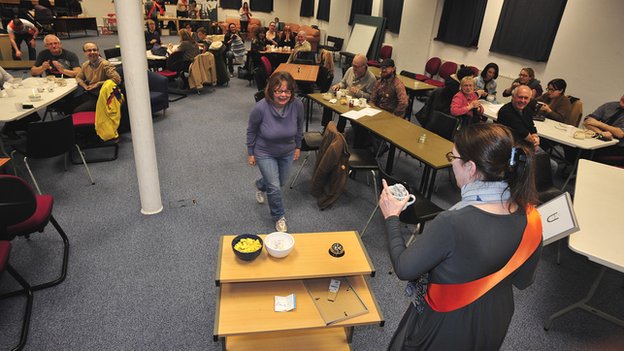 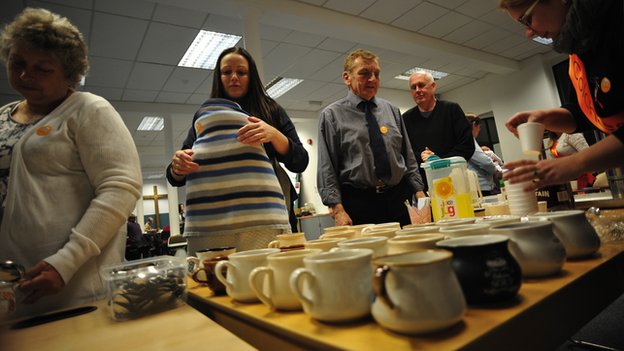 Colchestersoup currently has 60 bowls. They are hoping they will soon need more to meet demand.

In future Colchestersoup events, Taylor wants to expand its reach to those who rarely get involved in the community.

She also wants to attract great new ideas rather than just longstanding organisations.

"[People] can come along and put their idea to the test. And if the community likes it, they've got a ready audience before they even start." 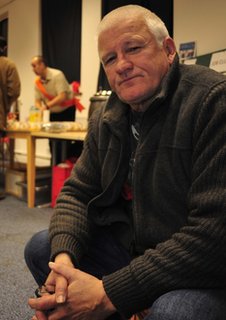 That audience is what Peter Hope, Colchestersoup's first ever winner, found so important.

In January he won £200 towards transforming an old boat into something capable of hosting community projects, including a small art gallery, a pop-up restaurant, as well as several other possible uses.

The plans are in progress, he says, but the real benefit of Colchestersoup was the people he met.

"It was one of the most energising things that has happened to me," says Hope. "Yes, the £200 was useful. But it was more about the networking, meeting other organisations that have had the types of battles we have had. Solidarity, I think they call it."

Readers have written in response to Can Soup change the world?

Sherry Fuller started Southend Soup in 2013. For her, Soup is "all about inspiring people to do one tiny thing" - she was spurred into action by a dog-walking friend, who took it upon himself to prune the neglected roses in their local park. Then when she heard the BBC report about Detroit Soup she decided to go for it. At the first event, all 35 people helped to prepare the soup. Fuller says that Southend has pockets of significant poverty. "People are a bit despondent, and that's why there's a hunger for this can-do approach." The last winner was an eight-year-old girl who won £154.20 to organise an "empowerment event" for children.

Lenna Cumberbatch is one of the organisers of London Soup. She says many of those involved work for charities, but this is completely different. "We're taking away the dynamics of givers and takers and creating a community." She says the pitchers give her an insight into the community she would otherwise n

ot have. One of the winners, a project called Just Bread, taught refugee women how to bake bread. They just needed the money for ingredients. "No-one else was going to give them that," says Cumberbatch. She admits it can be hard to keep going, but the venue is free because "nobody but the pitcher leaves with money."